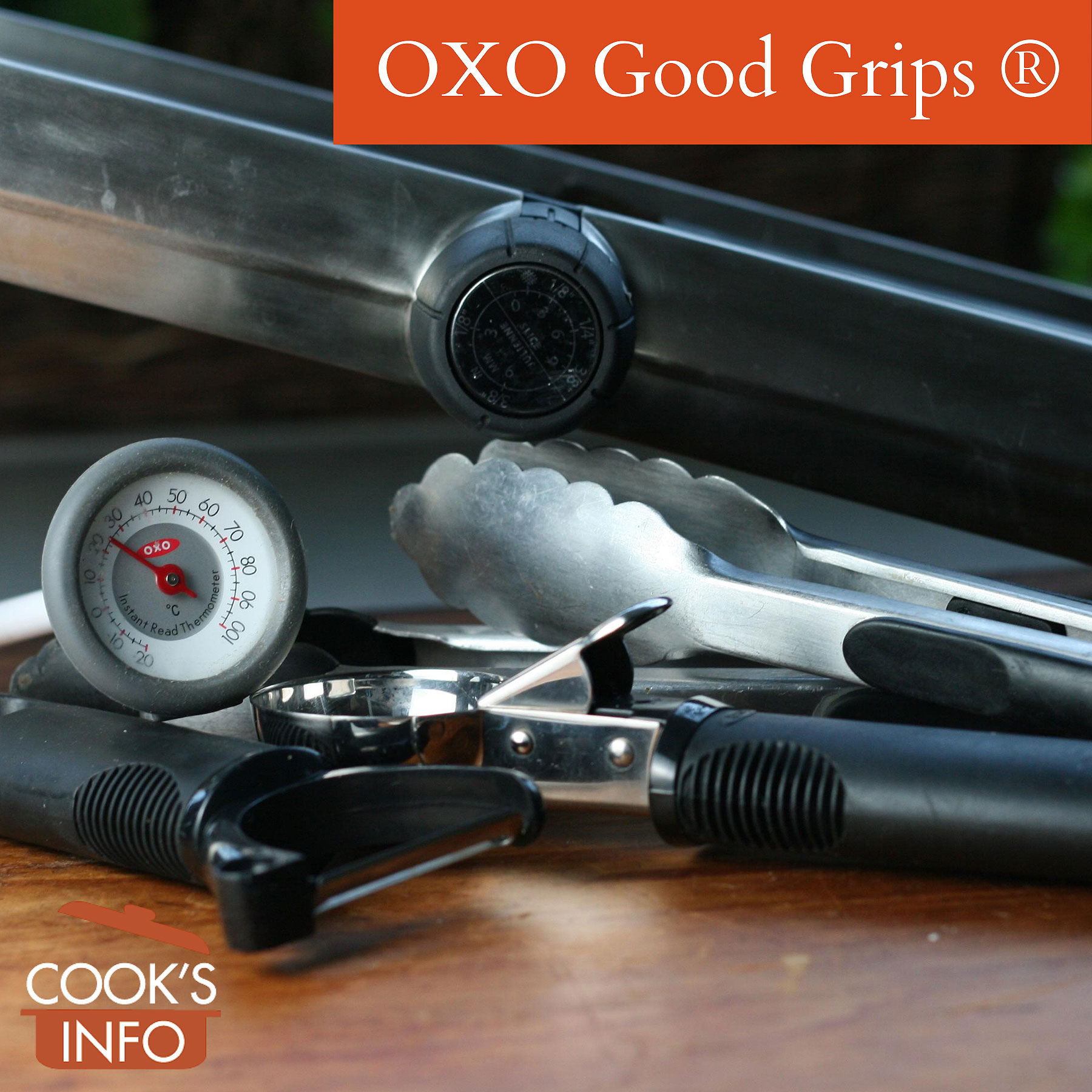 Oxo Good Grips® are a line of kitchenware that is worthy of mention because it rethought how kitchen tools had been made for generations, and retooled them with an eye to easier use by everyone, including an aging population.

The goals of design in the items are to better distribute and make use of force that people’s hands generate to allow better and more comfortable grips, and to make markings and print (on items such as measuring cups) larger and easier to read for everybody. The makers have rethought many of the kitchen tools that have always just been made in a given way — for instance, one design of their potato masher has a horizontal handle, rather than a vertical one as is customary, letting the weight of your body do more of the work rather than just your one arm.

All the products are dishwasher-safe. The handles are made of a plastic and rubber material called “Santoprene”, and have a matt finish so they won’t get slippery when wet. The handles also tend to be oval rather than round, as round ones can rotate in the palm of your hand.

Their products are sold at a small premium compared to standard tools, but many users swear by them as a joy to use

Oxo Good Grips has no association with the stock cube company called OXO in England, though many people assume it does.

Oxo Good Grips were created by Sam Farber, born in 1922. He is the nephew of Simon Farber, who had created the Farberware company back in 1900.

Sam had run his own kitchenware company called Copco from 1960 to 1988. His wife Betsey had developed arthritis. During Sam’s first year of retirement, he began wondering why so few kitchen tools were unfriendly not only to people with aging hands, but to everybody else as well. By 1989, he decided to do something about it and went back to work, founding the company called “Oxo International” to produce more user-friendly kitchen tools. He chose Oxo as a name because no matter which direction it was read, it was always correct, so it could be printed in any way. He got his son John to join him in the business.

Sam got designers to work for him based on royalties that he had previously worked with during his Copco days, particularly a design company called “Smart Design” in New York. The product line called “Oxo Good Grips” had its debut at the “Gourmet Show” in April 1990 in San Francisco. They unveiled 20 different products.

The Liebig’s Extract of Meat Company (now Oxo) filed for their first American trademark on the word Oxo for meat extracts on 13 August 1914 (# 71080542). The third renewal was on 9 February 1975; given that American trademarks are good for 10 years (though renewable indefinitely), Oxo must have let its American trademark expire sometime after 1985. Even if they had kept it up, it probably wouldn’t have prevented Oxo International from using the name for a line of kitchen tools, a completely different business. At one point, Oxo was even used as a brand name by the Illinois Tool Works Company for their line of electric arc welding equipment.

Oxo Good Grips filed for the “Good Grips” trademark in America on 1 March 1990. It was assigned serial number 74033573 and assigned to Helen of Troy Limited of Bridgetown, Barbados. The trademark for “Oxo” in America for kitchen tools is also registered to the same Barbados company (as of 2006.)