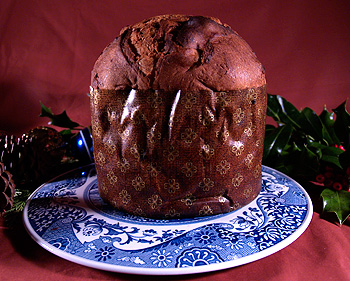 Panettone is a sweetened Italian yeast bread with dried fruit in it. It is a traditional bread in Italy for Christmas and Easter, often being given as a gift.

The bread is made tall, round, and dome-shaped at the top. Besides the bread dough, it contains raisins, nuts, and candied fruits. Sometimes food writers say it plays the same role in Italy that Christmas cake does in English-speaking countries, but that might lead to the visual impression that the bread is crowded with ingredients. Instead, a very light hand is used in adding the fruit and nuts.

The dough is a sourdough dough. It is allowed to rise about 3 times over 20 hours. This long rising ensures the lightness of the bread. A special baking mould gives the tall shape.

The packaging for Panettone is very elaborate and festive now. Shops are heaped up with stacks of the boxes from early November onwards. It is eaten until the 4th of January, which is the feast of San Biaggio.

You slice the bread vertically to serve. In the evenings, it is served with a light sparkling wine. In Peru, Panettone is also very popular at Christmas, where slices are served with hot chocolate. The practice was introduced by Antonio D’Onofrio from Caserta, Italy.

It is mostly made industrially; very few small bakeries still make their own.

At Easter, when it is called “Panettone di Pasqua”, the bread is made in a dove-shaped pan (dove is “Colomba” in Italian), with toasted almonds in it instead of raisins. 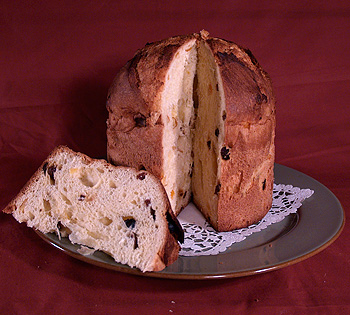 The geographic origin of Panettone is usually credited to Milan.

The word is possibly a corruption of “Pane di Tono” or “pan del ton” (luxury bread.)

As is usual for Italian foods, there is a plethora of tall tales behind its name and origin.

Angelo Motta began making Panettone commercially in 1919. The dome shape is credited to him; he also came up with the trapezoidal carton that it is now sold in.

This web site generates income from affiliated links and ads at no cost to you to fund continued research · Information on this site is Copyright © 2022· Feel free to cite correctly, but copying whole pages for your website is content theft and will be DCMA'd.
Tagged With: Italian Food, Sweetened Breads