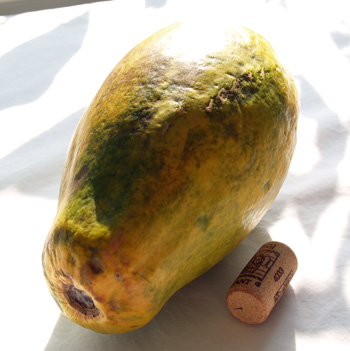 Papaya trees (which are actually not trees, but large herbs with trunks that are hollow inside) can grow up to 30 feet (9 metres) tall. Papaya fruit is sort of melon-like, both in shape and in its musky taste. The fruit starts off with green skin that turns gold as it ripens. The soft flesh inside is a salmon-orangey colour with black seeds. If the flesh is more orangey, it is called a “gold-meat” variety; if it is more salmony, it is called a “pink-meat” variety. The gold-meat varieties are, in general, less sweet.

Papaya, especially unripe or green Papaya, contains “papain”, an enzyme which turns out to be excellent at tenderizing meat. It is dried and used in many commercial meat tenderizers. Rubbing a piece of Papaya or cooking it with meat can help to tenderize it (or at least the surface of the meat, at any rate): the leaves also contain papain, and where people have access to leaves, they will wrap meat overnight in them.

That being said, there is no miracle meat tenderizer that is going to take a tough cut of beef and make it heaven on the barbeque. You can’t fool Mother Nature with tenderizer: tougher cuts of meat are best cooked with methods appropriate for them.

Papaya will ripen after picking if kept at room temperature. When buying a Papaya, look at the end where the stalk was: if there is a yellow ring there, the Papaya will ripen well. If the ring is green, it won’t ripen. To tell if a Papaya is ripe, stick it under your nose and smell: it should smell sweet.

If the flesh inside is still quite hard to spoon out, then you have jumped the gun in cutting it open: it isn’t fully ripe yet. The flesh should be soft. 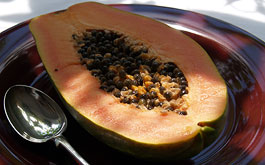 Inside a papaya fruit
– © Denzil Green

The black seeds, which can be eaten but aren’t usually, have a mild peppery, sour taste and an unpleasant texture in the mouth, so discard those. That being said, there are some salad dressing recipes that call for a tablespoon of them whizzed up in the blender with other ingredients, and unscrupulous pepper traders will still sometimes adulterate their pepper with ground Papaya seeds.

The most common variety of Papaya available in stores is Hawaiian Papaya.

Good source of B vitamins, beta carotene (Vitamin A), vitamin C, amino acids, calcium and iron. Some say it also aids in digestion.

The Papaya is probably native to Central America. By the 1600s, the Spanish were planting it in their Pacific colonies, and from there it was carried into India.

Called “lechoza” in the Dominican Republic. Called “paipsi” in Bengali.

In the UK and in Australia, a Papaya is often referred to as a “pawpaw”. A Pawpaw, however, is actually a completely different, unrelated fruit.

This web site generates income from affiliated links and ads at no cost to you to fund continued research · Information on this site is Copyright © 2023· Feel free to cite correctly, but copying whole pages for your website is content theft and will be DCMA'd.
Tagged With: Papaya