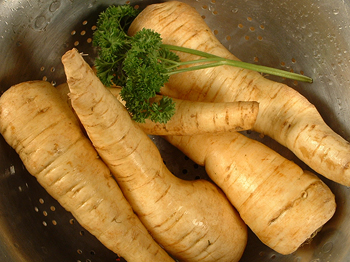 Parsnips are related to parsley, carrots and celery. They seem to rate with turnips in many people’s books, which is that you either love them a lot, or hate them even more. They are one of the few vegetables that you don’t want to harvest before a frost: they need a good snap of cold weather to convert some of the starch in them into sugar, making them sweeter.

Parsnips are shaped like carrots. Their green tops (which aren’t eaten) look a bit like flat parsley. Their skin can range from yellowish to creamy white. You can eat smaller, younger parsnips raw in salads. They have a pungent flavour when eaten raw, which gets milder when they are cooked. Larger, older parsnips have to be cooked, though they often have woody cores that won’t soften even during cooking. You need to trim these out before or after cooking. It’s these old, woody roots that have given parsnips a bad rap.

Use parsnips pretty much as you would carrots — that is, the flavour is different, but use in soups, mash them, roast them, boil them, etc.

Buy firm, unblemished parsnips. In the UK, you can buy them frozen in bags, ready for roasting.

Wash, top and tail as you do for carrots, and peel (discard the green tops; the peelings boiled in a small pot of water make amazing vegetable broth for your freezer). Cut lengthwise in half or in quarters. If you see a woody core, now is the time to trim that out (the trimmings can go into your broth pot.) If you are roasting them, blanch them first, then coat in flour and parmesan, and toss in beside your roast within the last 45 minutes of cooking. If you are going to mash them, chop them into chunks and boil.

Parsnips don’t need to cook a long time when you are boiling them. 15 minutes tops will do it, so if you are adding them to a soup or stew, do so in the last 15 minutes.

Instead of always mashing them, try boiling them chopped up, then drain and while still warm toss with finely chopped Stilton and walnuts. Or mix the boiled and drained parsnip with a dressing made of orange juice, olive oil, brown sugar and cinnamon.

Spices that go well with parsnip are nutmeg, ginger, mace, and cinnamon.

High in calcium, folate, Vitamin A, potassium. A half cup of cooked parsnip (before butter, brown sugar, and double cream, mind you) has 60 calories.

Remove any green leafy tops, or if they came in a plastic bag, remove from the bag so that they don’t sweat. Keep in vegetable crisper.

As they get older (2 to 3 weeks), they will start to go soft and shrivel a bit: when they go like this, use in soup or stew. They used to be a long-storage vegetable, but that was in the days of root cellars.

Parsnips are native to Europe. The Romans used parsnips. The Emperor Tiberius (14 BC to 37 BC) loved them.

Parsnips were very popular in the Middle Ages as they were a carbohydrate in a time before potatoes. Luckily, they were very nutritious as well. Because of their high sugar content, they were also used for jams, desserts and even parsnip wine. By the 1500s, however, they had fallen from favour, and were regarded as suited only for peasants and animal feed. During World War II, they were a vital part of the British diet.

The English word “parsnip” comes from the Roman name for them, “pastinaca”. Their word came either from the Latin word “pastus”, meaning food, or from the Latin verb “pastino”, meaning to get the soil ready for planting.

This web site generates income from affiliated links and ads at no cost to you to fund continued research · Information on this site is Copyright © 2023· Feel free to cite correctly, but copying whole pages for your website is content theft and will be DCMA'd.
Tagged With: British Food, Roman Food