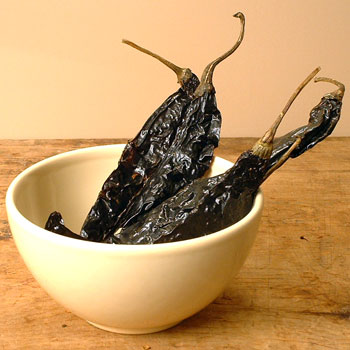 When this pepper is fresh, it is called the Chilaca. The Chilaca Chile Pepper plants grow an average of 3 feet tall (about 1 metre) and produce about 20 peppers per plant. The peppers are thin and dark-green, anywhere from 6 to 14 inches (15 to 35 cm) long. When fully ripe, the pepper turns to a dark brown.

You’ll encounter this more often in its dried form, when it is called a “Pasilla.” Dried, it turns a dark, reddish, wrinkled brown — in appearance, its skin looks like a raisin.

When fresh, Chilaca is mostly used in fresh salsas. When dried, Pasillas are mostly used in cooked sauces; they almost always make an appearance in a Mole sauce recipe.

Almost all Chilacas and Pasillas are imported from Mexico. There, two of the more popular varieties are “Pabellon One” and “Apaseo.”

Pasilla means “little raisin” in Spanish. In Western Mexico it is sometimes called “chile negro”, illustrating a confusion of pasillas with anchos that also happens in America, where they sometimes get called anchos.