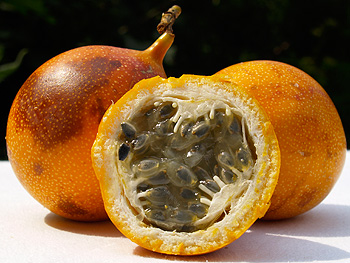 Passion Fruit grows on a vine in tropical regions. It has a tough, smooth, waxy rind that can be either yellow or purple. Purple ones have black seeds and are richer in fragrance and flavour. The yellow ones have brown seeds, and are less juicy. The purple ones are preferred for eating; the yellow ones are made into juice and preserves. Inside, both have a seedy, gelatinous pulp, which you eat, seeds and all. The flavour is like a cross between melon and guava.

Passion Fruits get sweeter as they shrivel. In fact, don’t eat until they are completely wrinkled.

To eat, just cut them in half lengthwise, and scoop out the pulp with a spoon and eat. You don’t eat the skin.

Passion Fruit are quite small. Each one will have only about 1 tablespoon of pulp in it.

The fruit is often used for fruit sauces. Some recipes will call just for the juice, strained; other recipes will want both the juice and the seeds. To remove the seeds, press the pulp through a strainer.

Smooth ones aren’t quite ripe and ready to eat. To ripen, place in paper bag at room temperature until the fruit gets quite wrinkled. At this point, you can then store them in the fridge for up to a week.

Native to the central part of South America.

“Passion isn’t what you think; it’s a fruit sensation announced for American kitchens by the Office of the Australian Government Trade Commissioner. The grand passion—a plump semitropical fruit with a tough purple skin—is filled with soft pulp, golden yellow, speckled with dark pips, the juice flower-like in fragrance and flavor.

Australia sends her glamour fruit in nectar form. It comes styled for drink-mixing, or to flavor ice cream, jellies, pies, cakes and puddings. Try a dash over a fruit compote, over a fruit salad, in fruit punch…

The juice had mighty appeal for GI’s posted in Australia during the war. That gave Norman Meyers his idea for introducing the juice in the States. Last winter he visited New York to take notes on our drinking. Like all Australians he was convinced we have no soft drink to compare with the passion nectar, no flavour for our cooking that can match this flower-like fruit which Australians consider ambrosia for the angels. Arrangements were made with Perry H. Chipurnoi, Inc., New York, to import the product, and now comes the first shipment.” — Paddleford, Clementine (1898 – 1967). Food Flashes Column. Gourmet Magazine. August 1948.

The name “Passion” doesn’t allude to aphrodisiac qualities in the fruit. Rather, it is alludes to the flowers of the plant, which are thought to resemble a crown of thorns such as that worn by Christ.

Called “chinola” in the Dominican Republic; “parcha” in Puerto Rico.