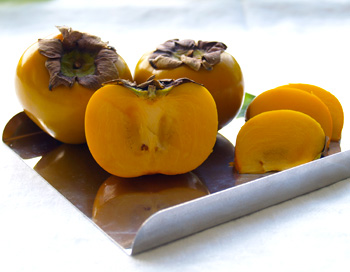 A Persimmon is a fruit that looks like a bright orange tomato, with orange flesh inside.

Persimmons don’t really have a pronounced, distinctive flavour. Some people attempt to describe its flavour by comparing it to juicy pumpkin mixed with allspice and cinnamon.

The taste of a persimmon is partly owing to the fruit being high in tannins, which can give an astringent taste. Originally, all persimmons had high levels of soluble tannins — meaning, they are available for your tongue to taste. This makes them unpalatable until the fruit has begun to rot a bit (see entry on Bletting), condensing the tannins so that they are less available for tasting.

A sub-family of permissions, called Fuyu, was developed in Japan specially so that tannins in these persimmons would condense during later stages of fruit ripening, so that these persimmons could be eaten while still in a firm state.

Consequently, there are two classes of persimmons that sum up the shape and ripening differences.

The Fuyu variety has squarish sides and a flat bottom. It can be eaten firm or soft.

An Israeli variety of Persimmon, called Sharon Fruit, was developed from the Fuyu.

The Hychia (Hachiya) variety is more elongated, and somewhat cone shaped. It is at its best when it is over-ripe — soft and and jelly-like — before eating them (see Bletting), as before that the fruit will be very tart and have real pucker power. 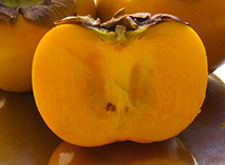 Dried Persimmons are Persimmons that have been peeled and dried whole; they have a sweetness and a texture like dates. To make them, in Japan at least where they are very popular, the fruit is harvested leaving a small portion of the twig on each. They are then peeled, attached to ropes via their twiggy bits, dipped in boiling water, then hung to dry for at least one and a half months. An edible white mould that looks like icing sugar will form on them when they are ready. They are referred to as “dried kaki” in Japanese cooking. The peelings may be dried separately for use in Japanese cooking.

Many people feel that despite being smaller, the American Persimmon (Dispyros virginiana), is more flavourful than the Japanese varieties.

When puréed, the flesh of any type of Persimmon will be thick and hold its shape, with no watery run-off. You can use this purée as a base for sauces, frozen desserts, or puddings. You can sweeten the purée with a bit of sugar, flavour to taste with the flavouring of your choice (lemon zest, fresh grated ginger, a liqueur, or brandy or rum), then freeze in small dishes and serve as a frozen dessert.

The mashed pulp also works well in any recipe that calls for mashed banana or mashed pumpkin, or applesauce

There is also a steamed pudding based on Persimmon.

Wrap individually and freeze for up to 3 months; when thawed, use for sauces. Do not, however, just refrigerate or the fruit will blacken. Freeze or keep at room temperature.

In Italian: In Florence called “diospri”; south of Siena, called “pomi”; in Rome, in the Veneto and elsewhere, often called “caco” (plural, “cachi”).

This web site generates income from affiliated links and ads at no cost to you to fund continued research · Information on this site is Copyright © 2023· Feel free to cite correctly, but copying whole pages for your website is content theft and will be DCMA'd.
Tagged With: Bletting, Persimmons