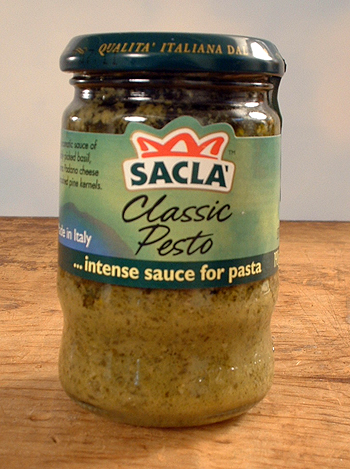 Pesto is an Italian word for a thick, ground, herbal preparation used as a sauce.

Most non-Italians think of it as a green sauce made from basil. That is in fact, however, just one type of Pesto. Other Pestos can be red from tomatoes in their recipes, or even white, as they are based on lard (see Pesto Modenese.)

Genoese-style Pesto, the best known in the UK and in North America, is made with basil, cheese and pine nuts.

Sicilian Pesto uses almonds instead of pine nuts and includes tomatoes. It doesn’t, however, usually doesn’t contain cheese, because in Sicily their Pesto often ends up in seafood pasta dishes, and Italian cooking doesn’t mix cheese and fish.

If you are making the Pesto before you are going to use it, even if it’s only a half hour or so, leave a bit of oil out of the recipe, then use that to completely cover the top of the Pesto with a thin layer of oil to prevent it going brown.

Freezes well. When either refrigerating or freezing, put a thin layer of olive oil on top to keep oxygen away from the basil to prevent its browning and losing flavour, and then in a tightly sealed container (as you would anyway for anything you were freezing).

You can refrigerate for up to two weeks with the layer of oil on top, and in a tightly sealed container.

Pesto is a more traditional pasta sauce than tomato sauce — it predates the Romans, and some speculate that it may have originated in North Africa. You can discount theories that it was a Middle Ages variation on the Roman fish sauce, garum. Certainly the Romans knew and used pine nuts a great deal, and for that matter, basil too.

Thee was a Roman city called Paestum in Southern Italy (originally founded around 600 BC by the Greeks), which is now called Pesto, but that has no relation to the sauce.

The city of Genoa, Italy is usually given credit as the birthplace of modern Pesto.

This web site generates income from affiliated links and ads at no cost to you to fund continued research · Information on this site is Copyright © 2022· Feel free to cite correctly, but copying whole pages for your website is content theft and will be DCMA'd.
Tagged With: Italian Sauces