American Piccalilli is a relish based on green tomatoes. It is generally green in colour.

Recipes vary wildly. Though a few recipes may include some prepared mustard or mustard powder, there is usually no mustard as in the original English or Dutch Piccalillis.

In the late 1800s, when Americans first borrowed the term Piccalilli relish, the main association they seem to have kept was pungent or hot, though largely by the use of horseradish, rather than mustard. The pungency largely disappeared in recipes in the 1900s, and American Piccalilli became much sweeter than the original.

Note that in Chicago, Illinois, some people use the word “Piccalilli” to refer to Sweet Pickle Relish.

The first American printed reference to Piccalilli that CooksInfo.com is aware of is from 1856. It is in a list of imported English products; note that the advertisement distinguishes it from Chow Chow. 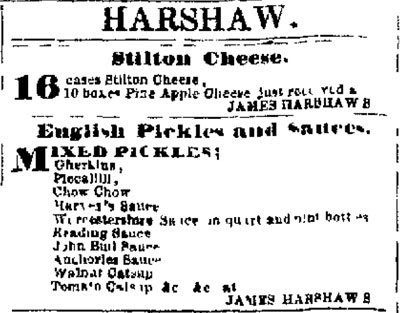 (NB: The earliest British printed reference to Piccalilli that CooksInfo.com is aware of dates from 1788, some 68 years earlier.)

The first American printed recipe for Piccalilli that CooksInfo.com is aware of is from 1878, shown below.

Note that the sauce contains whole mustard seed instead of prepared or powdered mustard. 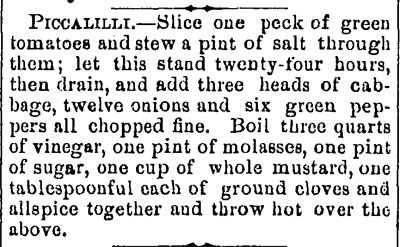 By the 1880s, knowledge of “Piccalilli” is common enough in America that jokes can be made about it:

“One of the men employed on a health department team, emptied a keg filled with piccalilli, mistaking it for swill, into his wagon recently. The lady of the house divined the man’s intention, but was not quick enough to stop him. A dollar stopped the woman’s tongue.” — The Lowell Sun. Lowell, Massachusetts. 13 October 1883. Page 8.

At the same time, the main taste associated with Piccalilli in the American press seems to be not so much “mustardy”, as “hot and spicy.” Mustard, even just in seed form, is now just a side-consideration. Horseradish becomes a dominant ingredient, instead.

“A Third Ward lady who has been making some piccalilli, thought she know more than the recipe book and increased the proportions of red pepper and hot spices about double, so as to be sure and have it warm. She succeeded. Warm? Well, ask her husband who tried to sample it by the teaspoonful. He won’t be able to eat any solid food or pick his teeth for a month. She thought she would have to throw it all away, but finally struck the happy thought that she would bottle it up and keep it for medicinal purposes, as a lightning cure, and a blister-making application. Her husband insisted she had better use it to heat the house with instead of a furnace this winter, but a compromise has been reached, by which it will be used half and half.” — Brieflets Column. Janesville Daily Gazette. Janesville, Wisconsin. 8 October 1881. Page 1.

“From all New England kitchens comes the delicious odor of fruit being canned, jams cooking up on the ranges, while the spicy smell of piccalilli fills all the air.” — Juniper, Jenny. A September Reverie. The Fitchburg Sentinel. Fitchburg, Massachusetts. 22 September 1888. Page 2.

“As this is the season for making all kinds of pickles, I will give my recipe for piccalilli : Pare smooth green tomatoes and slice, sprinkle a very little salt over them, add grated horseradish, nice red peppers and black mustard seed. Mix thoroughly, then cut up tomatoes and cabbage separate, salt a little and squeeze all juice out, then mix all together and pack in a jar and pour cider vinegar over and you will have a relishing dish.” — Household Helps. The Homestead (Newspaper). Des Moines, Iowa. 11 November 1892. Page 11.

Piccalilli: Allow to one gallon sliced green tomatoes one pint grated horseradish, eleven ounces brown sugar, two tablespoons each of fine salt and ground mustard. Put the tomatoes in a large stone crock, sprinkle the salt over them and let stand over night with a slight press on top. In the morning add to the tomatoes and let stand several weeks until it has formed its own vinegar. Always keep the pickle under the liquor and have it in a cool place. — from Rufus Estes. Good Things To Eat, As Suggested By Rufus. Chicago: The Author. 1911. Page 11.

This web site generates income from affiliated links and ads at no cost to you to fund continued research · Information on this site is Copyright © 2023· Feel free to cite correctly, but copying whole pages for your website is content theft and will be DCMA'd.
Tagged With: American Food, Relish