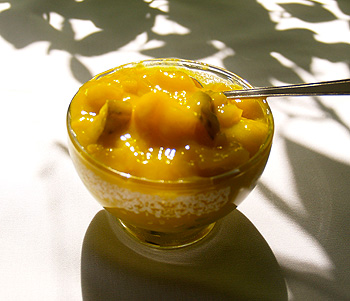 Piccalilli is a chunky yellow relish in a thick mustard sauce. It can be made at home, or bought commercially.

It has a taste variously described as pungent, head-clearing, tart, tangy, snappy and vinegary. Consequently, it stands up well to other strong-tasting foods.

Piccalilli is used as an accompaniment to cheeses, cured meats, sausages, meat pies, corned beef, etc. It usually accompanies these on the side of a plate, rather than being put in a sandwich, owing to it being hard to keep the chunks from falling out of a sandwich.

The thick yellow sauce is made of vinegar with mustard and turmeric, thickened with cornstarch. The mustard used is the hot English dry mustard powder. Some versions can be hotter tasting than others owing to more mustard in them (or, the addition of ginger powder, or for an even hotter taste, fresh grated ginger)

Commercial ones generally just have a few vegetables: cauliflower, cucumbers, and onion. 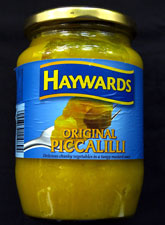 To make Piccalilli, the vegetables are washed and chopped, then salted to draw the moisture out and let stand overnight. Excess moisture would weaken the acidity needed to safely make this preserve. The next day, the vegetables are drained, and the excess salt is rinsed off. The prepared vegetable pieces are then put in a pot with vinegar, sugar and spices, and simmered until the vegetables such as the cauliflower are just al dente — they need to still be crisp. Cornflour is added to some fresh vinegar, mixed in, and the mixture is given a final simmer of about five minutes to allow the thickening to kick in. It is then packed into sterilized jars.

Homemade Piccalilli Relish is best after a few months of aging.

In the Netherlands, Piccalilli is popular on French fries in the south of the country, and in Amsterdam. It can also make appearances at Dutch Rice Tables. Dutch brands of Piccalilli are sold commercially.

Americans have also created a relish called Piccalilli which is completely different from both the English or Dutch kinds. 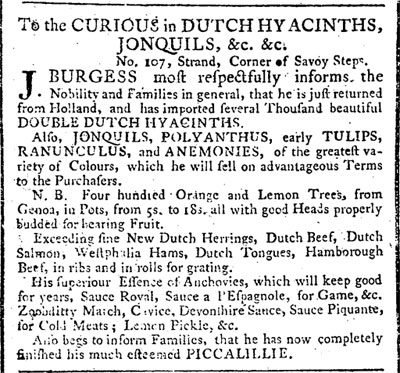 Above is another advertisement for Piccalilli, again by Burgess (in the St. James’s Chronicle Or British Evening-Post. London. 1 October 1789. Page 1). See last line of ad. The Burgess company appears to be the only one advertising Piccalillie at this time.

A year later, a 1790 advertisement clarifies that Burgess sells its Piccalillie in pots of different sizes, costing from three shillings up.

The exact origin of the word “Piccalilli” is uncertain.