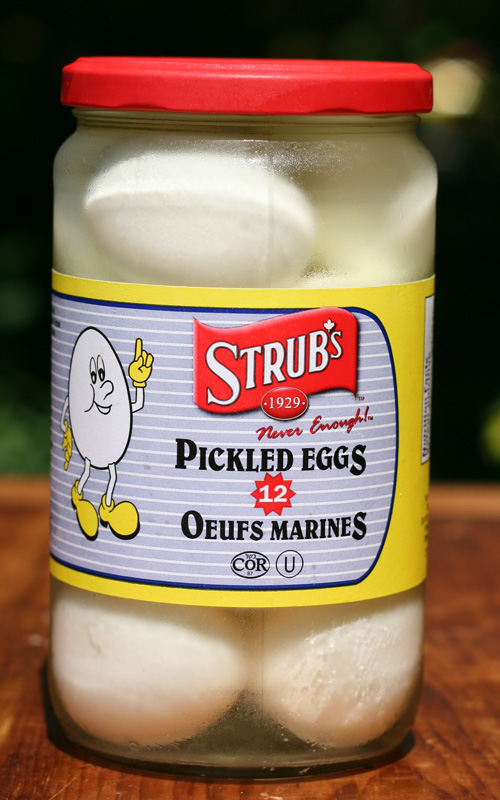 Pickled Eggs are eggs that are cooked by being hard-boiled, then peeled and then placed in a pickling solution. Now considered a delicacy, they were originally a means of preserving eggs before the days of refrigeration.

Preferences as to what constitutes the pickling solution varies by location.

Some pickle their eggs with sliced cooked beet and sliced onion in the jar; others like to add a chopped chile pepper and Tabasco sauce to make a spicy version. A cheat’s version is just eggs dropped into left-over pickle juice from pickles or pickled baloney. You can also make dill flavoured ones, that have dill weed added and use the pickling juice from dill pickles.

Some recipes add brown sugar. These tend to be those that use white vinegar. The resulting sweeter taste helps to compensate for the harshness of the white vinegar, as opposed to mellower tastes of cider or malt vinegar. Commercially bought Pickled Eggs tend to have more sugar in the pickling solution than many homemade ones.

In the UK, malt vinegar is used instead of white vinegar, giving a brownish colour to the eggs. Pickling spices such as cloves, peppercorns, allspice and cinnamon sticks tend to be added as well. You heat the vinegar with the pickling spices to get the flavours marrying, then pour over top the hard-boiled, peeled onions in the jar.

It is best to start with eggs that are at least two to three weeks old, so they will peel more easily — the shell tends to stick to very fresh eggs when they are hard-boiled. You need the eggs to peel cleanly for a good appearance.

Recommended procedures from various governmental food agencies include using only eggs that peel perfectly, peeling and using eggs while they are still hot, packing in jars with a pickling solution that has been brought to 93 C (200 F), covering eggs completely, leaving as little air space in the jar as possible, processing in a bath of water brought to 93 C (200 F) with the lids loosely on until the internal temperature of the jars reaches 82 C (180 F) or higher, then removing from the water bath, tightening the lids, letting cool then storing in a cool part of the basement or cellar. The proportions of vinegar and sugar are also critical for controlling the growth of spores that might not have been killed during the cooking process. Exact, government food agency approved recipes can be obtained.

Homemade ones may smell awful the first day or two, but the aroma will get better. They need to sit for at least 2 weeks before eating. Some recipes advise opening the jar at least once a day during the first week to avoid gas build-up (as the jars would then in effect be unsealed jars, this procedure may be intended for pickled eggs that are to spend their entire lives refrigerated.)

The older the Pickled Eggs get, the more rubbery they become.

Some people are very attentive to the storage and life span of pickled eggs, racing the jar back into the fridge seconds after they have extracted the egg they want; other people just keep them in a cool but unrefrigerated place for up to a year. In the UK, they are often left unrefrigerated.

Commercially-bought ones usually give advice such as after opening, refrigerate and use within 1 month. Many homemade recipes advise to store in fridge and use up within two months. Some food scientists say that they can be canned and stored (unopened) unrefrigerated; they recommend using them within 6 months for best taste quality, and refrigerating after opening.

If you store your Pickled Eggs in the fridge, it does prolong their shelf life.

In the jar, the eggs need to be covered with the pickling solution at all times. Like other pickled foods, botulism can occur if improperly stored or handled.

Fish Pickled Eggs out of their jar with a clean fork, not your fingers or a fork you’ve been eating from. This helps prevent contaminating the pickling mixture.

In the UK, Pickled Eggs are seen as very old-time pub. In North America, they are seen as “good ole boy” or working class. They are still, though, popular in the American south, and still often spotted in big jars at gas stations, for about 50 cents to 75 cents each (as of 2005.)

Some have tried to update the image of Pickled Eggs by adding balsamic vinegar to the pickling mix.

You eat Pickled Eggs room temperature or cold; you don’t reheat them. To eat them, you shake salt on them before each bite. This made them popular with bar owners, who would keep a jar of them for sale out on the counter — all the salt made people thirsty for more beer.

You can also use them on a relish tray in wedges or sliced.

When doing the cheat’s version — just plopping peeled, boiled eggs in left-over pickle juice — some people advise heating up the pickle liquid first, just to make sure it’s hot enough to kill anything that might have got on the surface of the eggs while peeling them. Most recipes, however, seem to say just pop the eggs straight into the pickle juice being reused as is. Estimates of how long to wait range from a few days to a week to a month. Such cheat’s versions of pickled eggs are intended for refrigerator storage only, presumably, as the jars have not been processed in a hot water bath.

This web site generates income from affiliated links and ads at no cost to you to fund continued research · Information on this site is Copyright © 2023· Feel free to cite correctly, but copying whole pages for your website is content theft and will be DCMA'd.
Tagged With: Eggs