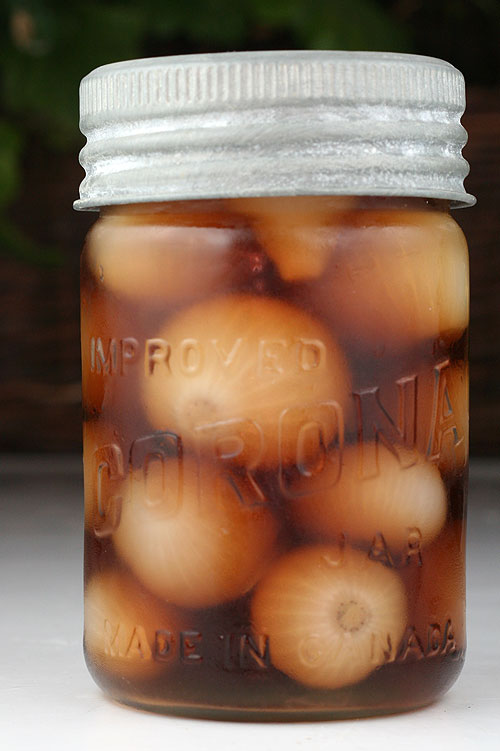 Pickled Onions are onions that have been pickled in vinegar to preserve them. The onions used are smallish ones, as opposed to Spanish-onion size. The onions are pickled peeled, but whole.

There are many different recipes and styles, even ones now that are spicy with chiles, curried, etc. You can also make fancier versions, such as shallots pickled in sherry and white wine vinegar.

The main style difference is English versus North American.

English-style Pickled Onions are very crisp and crunchy, and have a very sharp taste that stands up well to sharp, full-flavoured English cheeses.

They are brownish, because they are pickled in malt or apple cider vinegar, with brown sugar, salt and black pepper added to the mix.

North American store bought Pickled Onions tend to be quite bland compared to the English ones made commercially. Plain, white vinegar is used, giving a harsh taste. They tend to be soft; some can be almost spongy.

In making Pickled Onions, you first peel the onions. You can use small pearl onions, or small regular-sized onions. Use onions with no shoots coming out of them. To make onions quicker to peel, blanch them for a minute, then plunge in cold water until cold, then peel.

Soak the peeled onions in cold brine for at least 1 full day, weighing them down with something.

Then, you prepare a pickling mixture of vinegar and pickling spices in a small cloth bag or tea ball, simmered a bit to infuse flavours, then let cool completely before proceeding, and remove spices.

You pack the onions into sterilized jars, and pour the cold vinegar mixture over top, making sure that all is covered. If you bring the pickling mixture to a boil, and pour it on like that, you can make softer pickled ones.

Seal the jars, and let stand at a cool room temperature for 4 to 6 weeks before eating.

Can make you flatulent.