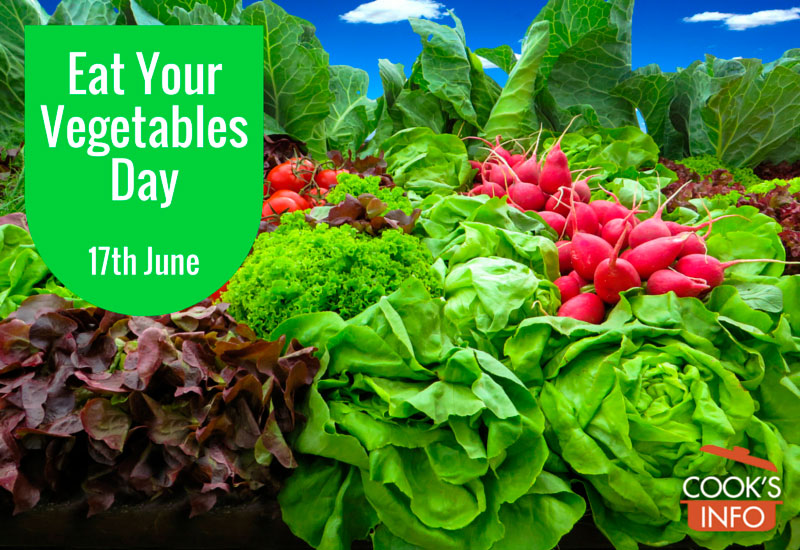 No excuses for anyone not having veggies today!

Every year on 17 June is Eat Your Vegetables Day. It falls in the middle of “National Fruit and Vegetables Month.”

If you’re a parent, you might want to get your kids, particularly fussy-eater ones who balk at their vegetables, to help in preparing the vegetable dish to make it more interesting for them (though the kids might see it as the hangman inviting you to help tie your own noose.)

Even though grown-ups normally do not have to eat their vegetables, today you have to pretend that you like them in front of your kids. Remember, it’s an Official Day!

Gail Cissna, a columnist for the The Frederick News-Post, covered the promotion:

“You might see a mushroom playing a flute this month. That would be Lord Mushroom. Or a leafy-looking character doing a jig, or an onion smiling through its one tear: I.C. Berg and Onion Joy, respectively.

The Frugies (pronounced ‘frujees’), as they’re collectively called, will help educate the public about the benefits of including fruits and vegetables in its diet, the United Fresh Fruit and Vegetable Association says. ‘Fresh Month aims to teach consumers across the country about the healthful, economical and convenient advantages of fresh produce,’ reads the group’s press material.

No funny little people are required to get me to eat fresh produce, but I enjoyed reading about them anyway. There are Auntie Broccoli, Penelope Pear, Pepe L’Pepper and Adam Apple.

There is E. J. Cobb, described as a ‘sympathetic ear.’ My favorite is Peach Velour — with a name like that, she probably has a past that would make you blush.” [1] Cissna, Gail. Vegetable Plates. Soufflé Street column. Frederick, Maryland: The Frederick News-Post. 12 June 1991. Page D-1.

In 1994, for that year, the month was officially proclaimed on 23 June 1994, by Hillary Clinton (President Bill Clinton’s wife) in a ceremony in front of the White House.

The earliest print mention of a ‘Eat Your Vegetables Day’ in June that CooksInfo is aware of dates from 2001: