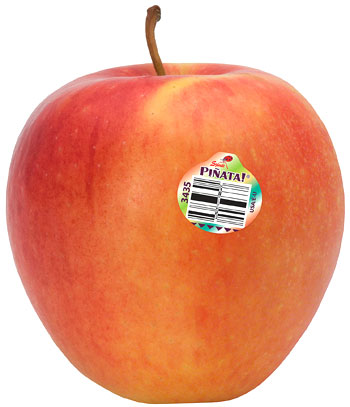 Piñata® is the trademarked name for an apple grown and marketed by the Stemilt Growers Company of Wenatchee, Washington, USA.

They are medium to large-sized apples, with slight ribbing, and orangish skin covered in red stripes. Inside, they have crisp, very juicy, very sweet, finely-textured flesh.

Some people think they detect pineapple and banana in the taste.

In Europe, the apple is grown in Austria, German, Italy and Poland.

Good for salads, because its flesh is slow to brown when cut.

The apple holds its shape well when baked.

Because the flavour of Piñata® Apples improves in storage, Stemilt Growers company holds the apples in cold storage until January, and then ships them to market. 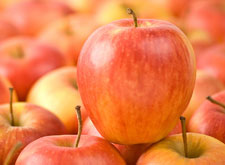 Pinata® Apples were developed in Dresden-Pillnitz, Germany from a cross between Golden Delicious, Cox’s Orange Pippin and Duchess of Oldenburg apples in the 1970s. The apple was released in 1986.

In Europe, the apple is known under at least three names: Corail, Pinova and Sonata.

Other growers who had previously licenced the apple under the Pinova name retained the rights to grow and market it under that name.