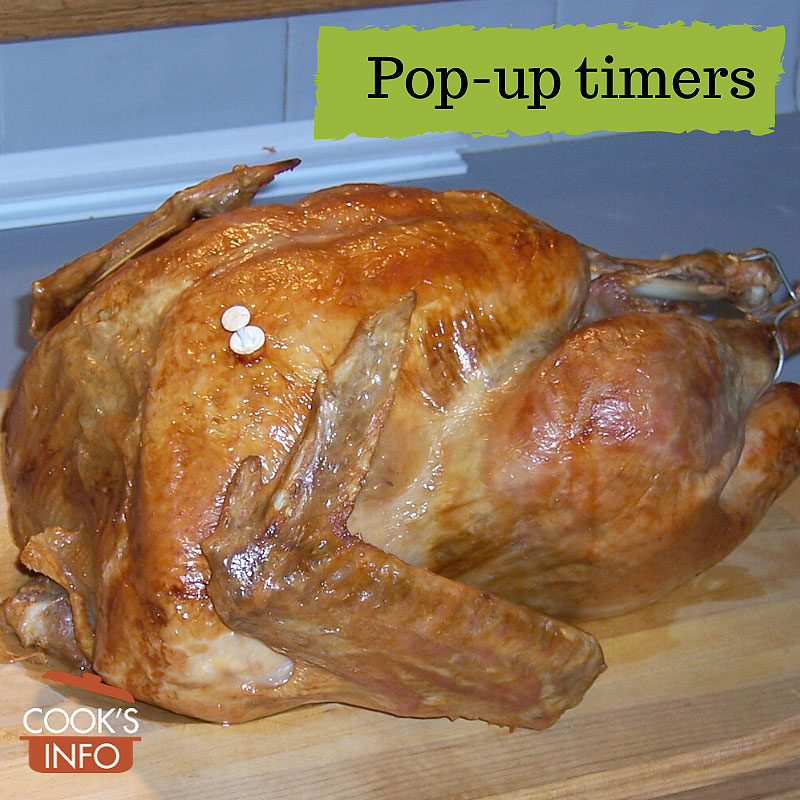 Pop-up timers are devices designed to let you see visually when a piece of meat has reached a certain state of doneness during cooking.

They are generally sold to the trade to insert in meat being sold onto consumers. They have been around since the mid-1960s.

How does a pop-up timer work?

They are mostly one-time use items made of heat-proof nylon that’s approved for use with food. There’s a spring inside them, which is held in place by a substance (salt compound or metal soldering) which melts at the right temperature, releasing the spring and causing the stem to pop.

There are a variety of pop-ups to suit various kinds of meat and various cuts/sizes of meat. For instance, a company may make five or six ones for beef, ranging from ones appropriate from steak thickness to ones appropriate for a large roast of beef, and within that range, more choices depending on whether it should indicate rare, medium or well done. There might be one for turkey breasts, another for turkeys under 25 pounds (11 kg), and another for turkeys over that.

Pop-up timers are generally considered reliable to within plus or minus 2 degrees F (1 C), though some butchers advise their customers not to trust them.

The problem with them is that while they may tell you what is happening in one part of the joint, it won’t reflect the current temperature in other parts. If your joint of meat does have one in it, it’s generally advised to not rely on them, but to poke a few other areas of the meat with an Instant Read Thermometer to get the full picture.

“It’s super important to check the turkey for doneness in several areas, [Ben] Chapman said. According to the USDA, ‘a food thermometer should be used to ensure a safe minimum internal temperature of 165°F has been reached to destroy bacteria and prevent foodborne illness.’ So stick that thermometer in several places to confirm you’ve reached a safe temperature throughout.” [1]As cited in: McMahan, Dana. Are you making these 8 holiday cooking mistakes? NBC News. 28 November 2019. Accessed January 2019 at https://www.nbcnews.com/better/lifestyle/are-you-making-these-8-holiday-cooking-mistakes-ncna1089156

“Can I rely on my supermarket bird’s preinserted thermometer, or should I use my own? The technology behind this device is quite simple. A harmless compound with a known melting temperature is liquefied in the bottom of the timer device. A spring is compressed into the molten material as it cools and hardens. The timer is then inserted into the thickest part of the breast. When the material at the bottom of the timer melts again during cooking, the spring is free to expand, and the plastic stem pops up. Most of these timers are calibrated to “pop” at 178 degrees Fahrenheit [81 C], a temperature chosen to make sure that the legs, which take more time to cook than the breast, will be completely cooked through. Unfortunately, this also guarantees that the breast meat will be thoroughly overcooked. Since we recommend that you remove the bird from the oven when the breast temperature reaches 165 degrees [74 C] [Ed: they then recommend a standing period of 30 minutes], the popper in your bird will never get hot enough to pop, so don’t rely on them for an accurate reading. Our recommendation? Keep your turkey meat moist and buy your own inexpensive thermometer.” [2]Cooks Illustrated. Thanksgiving Survival Guide. Accessed January 2020 at https://www.cooksillustrated.com/features/8129-thanksgiving-survival-guide

Even if you don’t rely on it, if your poultry comes with one inserted it is best to leave it in place, as removing it could leave behind a hole out of which all the meat’s juices will drain during cooking:

“Ignore the pop-up timer that comes with some turkey breasts; the meat will be long overcooked before the popper pops. If your turkey comes with a pop-up timer, leave it in and gauge doneness according to an instant-read thermometer. Don’t remove the timer until the meat is done; otherwise it will leave a gaping hole from which juices will flow.” [3]Cooks Illustrated. Turkey Breasts. Accessed January 2020 at https://www.cooksillustrated.com/how_tos/5416-turkey-breasts

The MacGyvers of the world say that, in theory, the timers supplied are re-usable. You put the tip into near-boiling water, and the metal remelts, enabling you to push the pop-up back in. You then stick it in cold water to let the metal re-solidify. This is iffy though: not only are they really designed to be single use, you also have to decipher a whole chart from that manufacturer to know what cuts of meat you can use it with.

Pop-up timers genuinely certified to be re-usable are on the market for consumer use. They will be made of a metal such as stainless-steel, or a food-safe, heat-resistant nylon or plastic material.