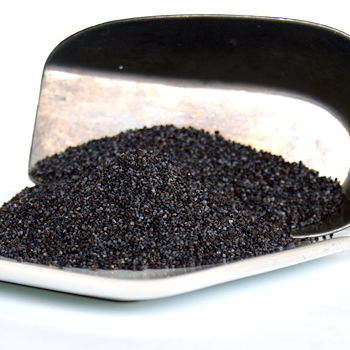 Poppy Seeds are the black things that get stuck in your front teeth when you have a bagel. They are really teeny, black or dark-blue seeds from the poppy plant. When cooked or toasted, they have a bit of a nut-like flavour.

Europeans tend to prefer black Poppy Seeds, and tend to use them in baked items. Indians prefer white Poppy Seeds, and use them in savoury dishes. For most cooking, however, you can swap one for the other. The Netherlands, Australia and Turkey are the world’s current big producers (2004.)

When you are making a recipe that has you using Poppy Seeds to make a filling, the recipe will generally have you use ground seeds.

Per teaspoon, 1.25 grams of fat (making them about 45% fat, almost all of which is unsaturated)

The high fat content will go rancid quickly unless stored in a refrigerator.

Poppy comes from the Latin word for poppy, which was “papaver”.