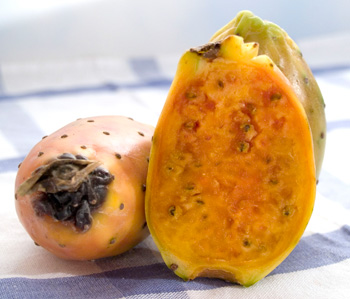 Prickly Pears are harvested from many different varieties of Opuntia cactuses, all of which are continually inter-breeding. The entire cactus will grow around 2 metres (6 to 7 feet), and produce red, yellow or purple flowers.

The cactuses can be propagated from seed, or by sticking one of its “leaves” in the ground (which is faster.) A new plant will grow from the leaf. The “leaves” are also eaten as a vegetable called Cactus Leaves (aka “nopales.”)

The fruit produced by the cactus ranges in colour from yellowish-green to purplish-red, and in length from 5 to 15 cm (2 to 6 inches.) All will have prickly spines on them, which mean they definitely must be peeled before eating. The fruit must also be handled carefully. The prickles can really embed themselves in your skin and be very irritating. The spines are broken off before the fruit is sold in stores.

Inside, the flesh is sometimes yellowish-green, but usually brilliant red. It has a taste somewhere between raspberry and watermelon with a hint of bitterness. There are many tiny seeds which many people prefer to strain out or otherwise remove.

The fruit can be served in slices in fruit salads, or puréed and strained for use as a sauce, or stewed, or used to make preserves.

The fruit is native to Central and South America, but is also cultivated in Australia, and in Sicily, Italy.

The cactus is also used as a host to “farm” cochineal beetles on.

Owing to this being a low-acid fruit, special tested procedures would be needed to store prickly pear cactus flesh or juice via home canning (either pressure canning or acidification); none have been developed by reputable authorities as of 2015. Consequently, freeze the fruit or juice instead.

Prickly Pear cactuses were introduced in Australia in the 1800s for use as hedges, but did so well they were regarded as a nuisance.

Fruit from some Opuntia cactuses may be referred to as “tuna” or “prickly pears.” Note: the Spanish word for the fish we call “tuna” in English is “atun”, so there’s no confusion in the minds of Spanish speakers.