They are wieners, impaled on a wooden stick, dipped in batter, and deep fried. They are served and eaten hot, holding them by the stick.

Pronto Pups is a trademarked name, owned by the Pronto Pup company in Portland, Oregon. They will licence the rights to commercial use of the name to sell their food product to businesses in various parts of America.

The company doesn’t, though, keep secret how to make Pronto Pups; their website tells you how, step by step. They sell the Pronto Pup batter mix by mail order in bags of varying sizes from 5 pounds to 50 pounds (2 to 22 kg.)

At state fairs, you’ll see yellow Pronto Pups huts, with the company’s logo of a wiener wearing a Mexican sombrero. [2] These are operated by their licensees.

The current owner of the company is Carley Sulmonetti, who took over after her husband Alex died and left her the company. Her son, David, manages it. Carley and Alex trained David how to dip Pronto Pups correctly back when he was a teenager. [3] David is now training his two daughters in the business.

You may see newspaper articles saying that a certain person in a certain town is the owner of Pronto Pops. That is inaccurate; what that person would own is the rights to publicly use for business the Pronto Pup name in that owner, having licenced that right from Pronto Pup. For instance, some sources mistakenly credit Dick Yoder with the invention. Yoder (died May 2010, aged 83) had the exclusive Kansas franchise for them for 36 years, and before that, worked for 9 years for the previous owner of that franchise.

Pronto Pups were created by George and Vera Boyington in the late 1930s. They had a hot dog stand at in Rockaway Beach, Oregon near Portland.

The story goes, they got fed up with the hot dog rolls always getting wet along the beach, especially after a deluge on Labour Day weekend in 1938 or 1939. He wanted another way to serve the wieners. George came up with idea of battering the wieners instead of serving them in a roll. He first sold them in September 1941 at the Pacific International Livestock Exposition; George and Vera went through over 15,000 of of the newly born Pronto Pups. One of their early slogans was “the wiener dun in the bun.”

They started licensing Pronto Pup businesses along the Pacific Coast. George had designed his batter so that he could supply it to them; all they needed to do was add water, and cook the wieners up. Servicemen stationed during the war on the coast got to know and like the product, and applied for business licences across the country. The Boyingtons sold the business in 1950 to Alfred Sulmonetti, and his brother, Alex Sulmonetti. Alfred had been their lawyer. George died in 1979; Versa remarried, and died in 1993. 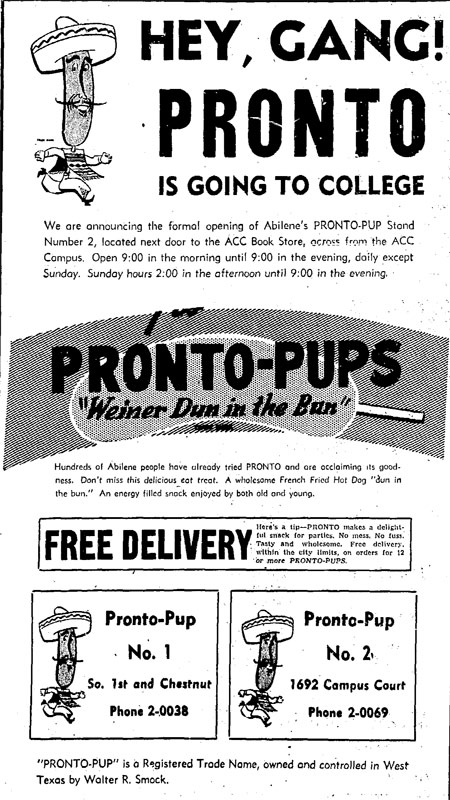 [2] “He hired an artist named Amado Gonzalez to design a logo, color scheme, stall displays and other materials, and in 1941 began to market the entire Pronto Pup package to entrepreneurs across the country. Gonzalez created the colorful shop exteriors in a Mexican theme, with stripes in red, green, yellow, black and white. Gonzalez’ logo, still used by the company today, is a man with a Pronto Pup head and a jaunty sombrero.” — Price, Niki. Born on the beach: The Pronto Pup returns to Rockaway Beach, where it was invented 70 years ago. Lincoln City, Oregon: Oregon Coast Today. 30 June 2009.