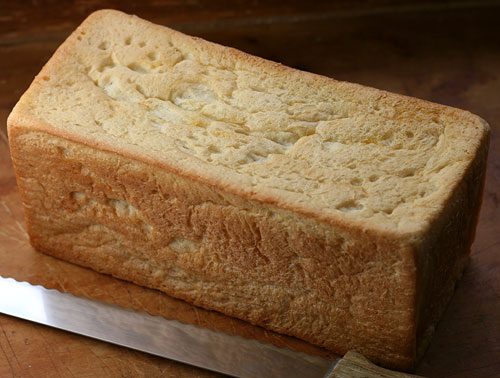 Pullman Bread is a soft, white bread of the English / North American variety (white flour, yeast raised.) It is baked in special “pullman pans” which are longish, rectangular-shaped loaf pans that have lids on them.

This makes all loaves uniform in appearance, and when sliced, produces uniform, perfectly square slices that make for picture-perfect sandwiches. The sides and bottom end up with a dense crust; the top ends up with a very soft crust.

You shape the dough out into a long cylinder to encourage it to fill the length of the pan uniformly. The entire pan needs to be well greased, including the underside of the lid. You need to develop a feel for how much dough to put in the Pullman pan: too little and it won’t fill the pan, too much and the bread will be too dense, as there will be too much dough trying to expand in a constrained space.

You don’t put the lid on while the bread is doing its final rise in the pan. Some people who are more experienced do, but you really have to have a feel for this because sliding back the lid while the dough is rising to check on it can wreak havoc with any dough that has touched the lid. When the dough is within 1/2 inch (1 cm) of the top of the pan, you slide the lid on, then bake.

Remove the lids while the bread is still hot; ideally, as soon as you remove it from the oven.

Pullman Bread is the bread that, because it is perfectly shaped, is usually chosen to be dyed green, red, pink, etc for fancy sandwiches. Proper bakeries let you special order it already coloured. This kind of Pullman sandwich bread usually has its dough is usually enriched with an egg and milk to give it a slightly denser but finer grain. This makes not only nicer-textured finger sandwiches, but makes the slices of bread easier to cut into fancier shapes.

You bake the bread in 4 stages.

Then turn out of pan onto wire rack.

Pullman Bread has been made since at least the 1930s. In 1931, the American Society of Baking held a session on “Building the Pullman Formula” (led by a John C. Summers) and Slicing Pullman Bread (led by a Richards J. Conly.) In 1936, they had a session on “Eliminating one type of hole in Pullman bread”, led by an I.A. Berg.

The name is obviously associated with Pullman of railroad fame, but speculation varies as to the exact association: from the name coming about because the bread is shaped like a railway car, to it was made this way because such loaves would take up less space in the kitchens of Pullman dining cars.

This web site generates income from affiliated links and ads at no cost to you to fund continued research · Information on this site is Copyright © 2021· Feel free to cite correctly, but copying whole pages for your website is content theft and will be DCMA'd.
Tagged With: American Breads, American Food