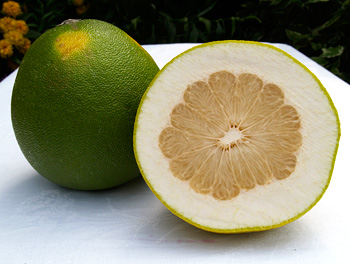 Pummelos look a lot like grapefruits, but they are often bigger even — as big as a cantaloupe melon, or more. They are the largest of the citrus fruits, ranging from 4 to 12 inches wide (10 to 30 cm.)

The tree can grown anywhere from 16 to 50 feet tall (5 to 15 metres.) In the western hemisphere, the tree is still mostly grown privately as a curiosity and for breeding purposes at research stations. The fruit can vary a lot because it isn’t a grafted species, it’s actually a natural citrus fruit tree that can grow from seed and cross-pollinate with others. Because the fruit can vary a lot, this makes it a less popular item to plan to sell to consumers, in today’s environment where even designer-water bottle Environmentalists expect their apples and oranges to always be the same.

Pummelos have thick, soft, smooth skin whose colour can vary between green, greenish yellow, pale yellow or tan. The fruit will be round or slightly pear shaped. Inside, the flesh will range from pale yellow to greenish yellow to pink to dark pink. Unlike grapefruits which generally have 12 fruit segments in them, Pummelos will have 11 to 18. There are generally only a few large seeds inside, though now and then you will come across a more seedy one. If the Pummelo tree was cross-pollinated by another Pummelo tree, there will be more seeds. If it was cross-pollinated by another type of citrus fruit tree, there will be fewer seeds.

Eat as you would a grapefruit or orange. Though the peel is easy to remove, be prepared to work at bit at getting the segments out on some Pummelos. On others, they will separate easily. The peel can be candied.

Store in fridge for up to 1 week.

Pummelos are native to South East Asia. They were probably in China by 100 BC. The seeds were probably first brought to Barbados in the 1600s by a Captain Shaddock (thus one of its many names). They were certainly being grown in Barbados and Jamaica in 1696.

Pummelo is probably the ancestor of the grapefruit.

There is often confusion between Pummelos (Pomelos) and grapefruit, as this 1931 newspaper columnist demonstrated:

“Did you have your pomelo this morning? Chances are about one in ten that you did, for that is the estimated proportion of mornings in which the average Chicagoan eats “grapefruit”, the real name of which is pomelo. That doesn’t mean that the so-called grapefruit is a gay deceiver, says Louise L’Engle of the Iowa State Colleges foods and nutrition department. She would rather class the pomelo as “a most excellent citrus fruit which gained its widely used nickname from the fact that the fruit hangs in clusters on the trees, not unlike grapes on a vine.” — Pomelo Easily Canned, and is Worth Canning. New Grapefruit Crop in Market Now. Chicago: Chicago Tribune. Friday, 16 October 1931. Page 24. [Ed: Louise L’Engle was cousin to author Madeline L’Engle.]

The English word “Pummelo” comes from the Dutch word, “pompelmoes”.

The French and German names for Pummelo are, unfortunately, the same as the words they use for grapefruit.

This web site generates income from affiliated links and ads at no cost to you to fund continued research · Information on this site is Copyright © 2021· Feel free to cite correctly, but copying whole pages for your website is content theft and will be DCMA'd.
Tagged With: Pummelo