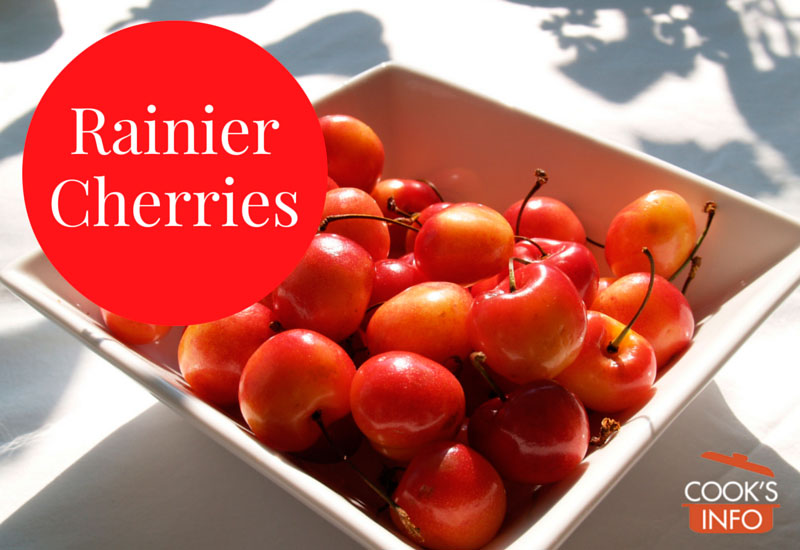 Rainier cherries are firm, large sweet cherries with pale creamy-yellow flesh with pinkish tones, and yellow skin that has a pink flush to it.They are about 1/3 sweeter than many other red cherries, and ready to pick in June and July.

Owing to their thin skin, Rainier cherries bruise easily, and the yellow skin makes the bruises all the more visible. Consequently, special care has to be taken in handling and shipping them.

Rainier cherries are grown in the Pacific West area of America, and as of 2006, in Canada and Chile.

The tree can be pollinated by a Royal Ann cherry tree.

Some home gardeners think that birds don’t plague Rainier cherry trees as much as they do trees with bright red cherries. Professional growers, however, say they can lose anywhere from a quarter to third of the crop to birds.

Rainier cherries are very popular in Japan, where they will sell for about $1.00 US each in Japan (2006 prices.)

You can cook with Rainier cherries.

Rainier cherries were developed in 1952 by a Harold Fogle (born c. 1918). He was with the Washington State University’s Irrigated Agriculture Research and Extension Center at Prosser, Washington State.

He’d actually been hired to work on peach trees, but a freeze during the winter of 1949 had killed off many of the seedlings and buds he was working with, forcing him to look at something else for a while until the stock got renewed. He worked on developing a cherry that would mature earlier than Bing cherries. The end result was the Rainier (during development called “P 1-680”), the result of a cross between Bing and Van cherries. The variety was released to the public domain in 1960.

A special shipping process had to be developed to handle them.

Some sources say the original mother Rainier Cherry tree is still alive. In 2021, we checked with the Extension Center at Prosser, Washington and got this answer:

“I am the current sweet cherry breeder at WSU.  I don’t know for certain, but I don’t believe the original ‘Rainier’ cherry tree is still around.  The oldest trees I have in my orchards are probably fewer than 20 years old.  There are a few older trees in random places at the research station, but I don’t think any of them are Rainiers.” [1]Per McCord to CooksInfo. 27 January 2021. Email on file.

Eskenazi, Stuart. The Other Rainier: The making and marketing of Washington’s celebrity fruit. Seattle, Washington: The Seattle Times Magazine. 27 June 2004.

Moore, Elizabeth Armstrong. If it’s July, it must be time for those golden Rainier cherries. Boston, Massachusetts: The Christian Science Monitor. 6 July 2005.