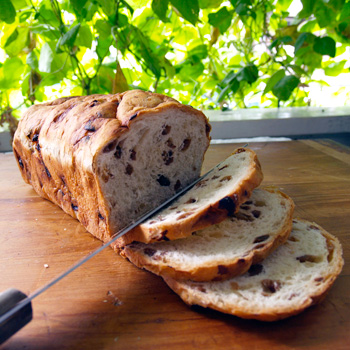 Raisin Bread is a leavened loaf of bread, with raisins mixed into the dough.

It is usually classed as a sweet bread owing to the fruit in it. The bread itself is almost always white bread, but you can get whole wheat as well.

Raisin Bread is usually eaten on its own, either toasted or untoasted. If toasted, it is usually buttered as well — this is popular for breakfast.

Raisin Bread can be used for sandwiches, such as peanut butter and jelly sandwiches. If the raisin bread is plain (i.e. no cinnamon-sugar swirls), some like to use it also for savoury sandwiches as well such as chicken or ham salad.

Most bread machines have what is called a “raisin beep” on them. The beep indicates the point at which it’s safe to add items such as raisins to your bread dough — safe meaning that the items won’t get completely chewed up and just disappear completely into the dough.

This web site generates income from affiliated links and ads at no cost to you to fund continued research · Information on this site is Copyright © 2022· Feel free to cite correctly, but copying whole pages for your website is content theft and will be DCMA'd.
Tagged With: Sweetened Breads