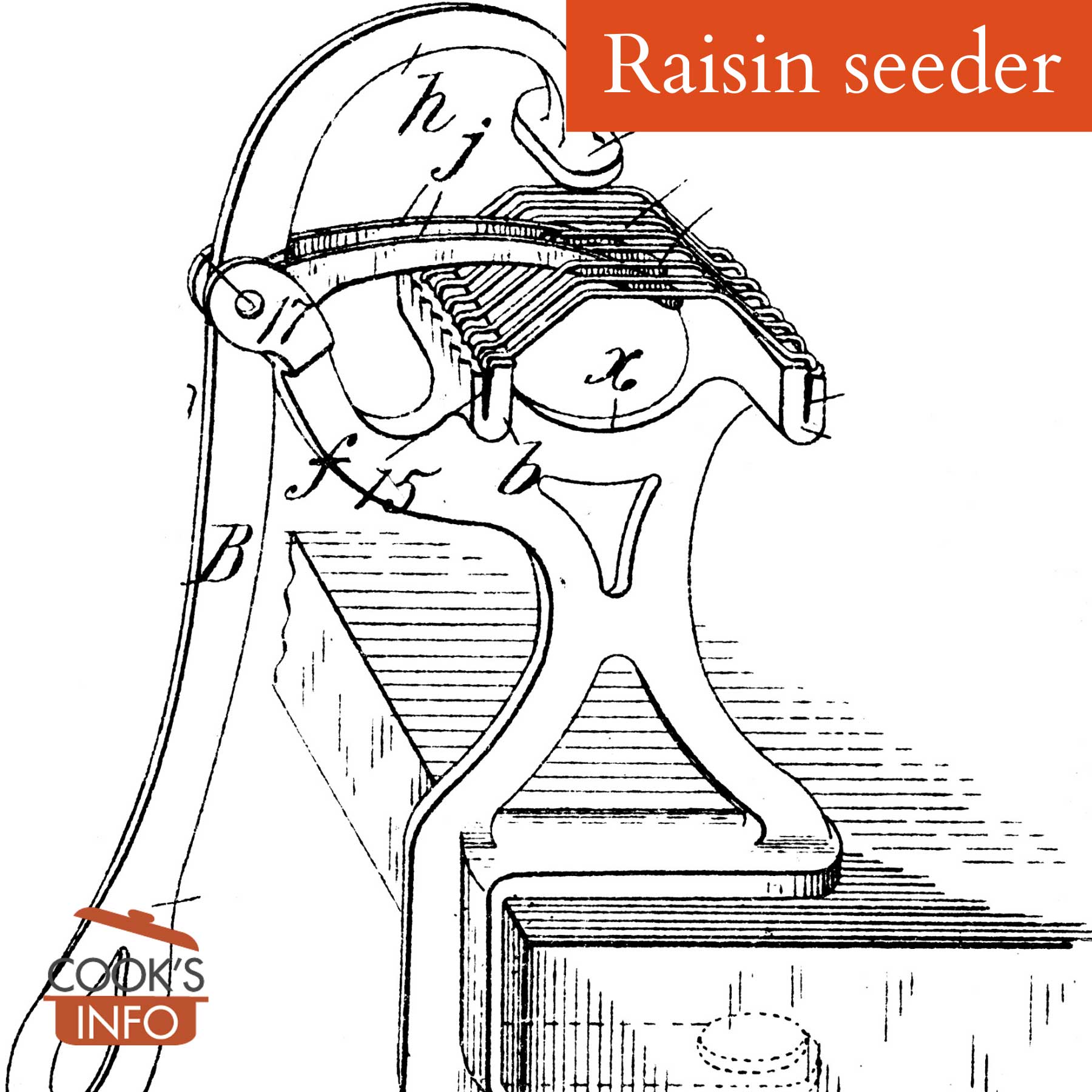 A raisin seeder is a tool to remove seeds from raisins. These tools are now considered obsolete since the advent of raisins being sold in stores already seeded (or in fact grown seedless) since the early 1900s. Before that, you had to seed raisins yourself at home before using them in recipes, etc.

Some raisin seeders were just hand-held presses, about the size of a stamp for sealing wax on letters. But instead of a flat press on the end, there were wires. You put a raisin on a flat surface, and pressed down on the raisin, forcing the flesh down and the seed up through the wires. These sold in 1893 for 15 cents US. They were made by the Everett Company of Boston, which advertised them as “Just What Every House-Keeper Needs.” You would do one raisin at a time, but they promised that you could use it to seed a pound (450 g) of raisins in about 10 minutes.

Other raisin seeders were cast iron devices, designed to mounted with a clamp on the side of a table or a shelf. They weren’t very large, only about 15 cm (6 inches) tall. You placed the raisins on a flat surface at the top. There was a lever arm at the back. You lifted the arm, causing the top of the arm to press down on the raisins, squeezing the seeds out through a hole in the bottom of the flat surface. The seeds would collect in a receiving bowl below.

One model had you put the raisins in a hopper. Turning the handle turned two wheels inside, one of which had short spikes on it. The seeds shot out one tube; the flesh of the raisins out another. These models promised that they could do a pound of raisins in 5 minutes.

Most manufacturers advised you to scald or wet the raisins first. This prevented them from sticking to the wires or the pressing surface.

Raisin seeders were still being advertised up into the 1920s.

This web site generates income from affiliated links and ads at no cost to you to fund continued research · Information on this site is Copyright © 2022· Feel free to cite correctly, but copying whole pages for your website is content theft and will be DCMA'd.
Tagged With: Presses, Raisins