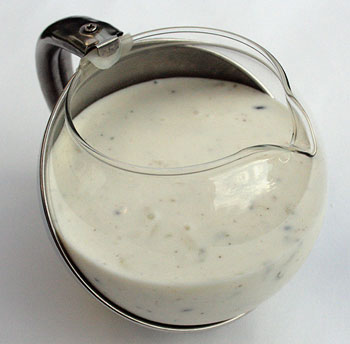 Raita is an Indian yoghurt-based sauce with vegetable or fruit in it. It serves as a table condiment, acting as a contrast on the plate to hot spices.

It can be served chilled or room temperature.

There are many varied recipes for Raita. It can be a thick or thin sauce, and be used as a spooning or pouring sauce, a condiment to the side, or a dip. Some versions have such a high proportion of vegetables to yoghurt in them, that the sauce can become like a salad.

The vegetables in the sauce can include shredded cucumber, eggplant, chopped raw onion, diced green chiles, grated carrot, chopped tomato or spinach. Fruits can be banana, pineapple and papaya, etc. Herbs used can be fresh cilantro, dill and/or mint.

Some people say that the mustard seed is essential — after all, the “Rai” part of the name means “mustard” in Hindi. Be that as it may, many authentic recipes don’t include them. During the Navrati fasts, some people avoid mustard seed, and use things such as cumin seed instead in their Raita. (Anyone who avoided mustard seed for religious food reasons would likely avoid onion and garlic as well for the same reasons.)

Most recipes that use cucumber advise to shred or dice it first, salt it, and place it in a colander for about two hours to allow the salt to draw moisture out of the cucumber — to prevent a “puddle” of water at the bottom of your Raita.

Raita is not a traditional part of Bengali cuisine.

It’s a myth that authentic Raita recipes don’t include cucumber because Ayurvedic tradition considers a mixture of cucumber and yoghurt to be harmful to the body.

Ayurvedic tradition may or may hold that (the other part, left out, is that this folk tradition also basically says “may be harmful based upon your constitution“), but, be that as it may, hundreds of absolutely authentic Raita recipes include cucumber.

Called Raita in Northern India; “Pachadi” in Southern India (though “Pachadi” can refer to yoghurt-less side dishes, too.)

This web site generates income from affiliated links and ads at no cost to you to fund continued research · Information on this site is Copyright © 2023· Feel free to cite correctly, but copying whole pages for your website is content theft and will be DCMA'd.
Tagged With: Indian Food