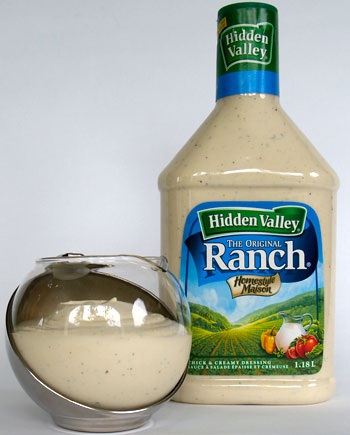 Ranch Dressing is a thick, creamy, rich-tasting dressing made from mayonnaise, buttermilk and herbs.

It is popular as a condiment on burgers and sandwiches, and as a dip for vegetables, pizza slices, deep-fried bar foods, etc.

There are many brands, because recipes cannot be patented, and because though the “Hidden Valley Ranch” part of the original name was trademarked, the “Ranch Dressing” part of the name on its own was not.

Some variations use sour cream instead of buttermilk.

Make a paste of the garlic, Parmesan, and salt. Set aside.

In a separate bowl, whisk together all remaining ingredients. Then blend in the garlic and cheese paste.

If not using up all immediately, store refrigerated for up to a couple of days.

Buttermilk dressing had been around forever. Buttermilk provided a fat for salad dressing, where vegetable oils or olive oil were not plentiful.

Credit for the popularization of Ranch Dressing goes to Steve (aka Kenneth B.) Henson, born in Thayer, Nebraska. He had married his wife Gayle in 1937 (she died in 1993.) In 1954, they purchased a “dude ranch” near Santa Barbara, California, and called the ranch “Hidden Valley Ranch.” But income from the “dude ranch” wasn’t enough to keep the 120-acre spread going, so he sold 54 acres of it to keep their heads above water.

Earlier, in 1949, he had gone to Alaska for three years to work as a plumbing contractor. He also ended up cooking for his fellow workers, and so there he refined a recipe for buttermilk dressing. This dressing had become the house dressing at Hidden Valley Ranch. They’d even sell their guests bottles to take home with them. They started to get so many requests for it — more than bookings for the ranch itself — that they created a packaged mix called Hidden Valley Ranch Dressing for stores and customers far away. The dried package mixture was salt, monosodium glutamate, dehydrated garlic, dehydrated onions, black pepper, dehydrated parsley and calcium stearate.

The first store it was sold in was Kelley’s Korner in Santa Barbara. The packages sold out so fast, the store owner,Loyd Kelley, thought his staff was stealing it. Within no time, the dude ranch became mostly transformed into a salad dressing centre.

Henson sold the actual Ranch in 1973, and later, in October 1973, he sold the brand and product to Clorox (who also owns Kitchen Bouquet) for $8-million US.

The package mix was relatively popular, considering you had to purposefully go out and buy some buttermilk to add to the mix, but Chlorox decided to make it easier. They reformulated the mix by adding buttermilk flavoring, so that regular milk could be used instead.

In 1983, Chlorox came up with a shelf-stable bottled version that was good for up to 150 days, despite the high dairy content in it. At this point, the dressing really took off.

By the late 1980s, Ranch was starting to appear as a dip even, and in 1992, Ranch overtook Italian as America’s most popular salad dressing.

Dunn, Michael A. How to catch Lightning in a bottle. In “Free Enterprise Land.” Houston, Texas: Goodway Printing. 2007. Page 10.

This web site generates income from affiliated links and ads at no cost to you to fund continued research · Information on this site is Copyright © 2022· Feel free to cite correctly, but copying whole pages for your website is content theft and will be DCMA'd.
Tagged With: Salad Dressings