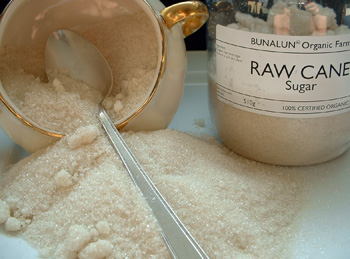 Raw Sugar is sugar that has not yet been refined enough to become white sugar.

It is a golden colour with coarser granules than white sugar. It is slower to dissolve, and gives a warmer flavour with more honey undertones.

It is made from sugar cane; beet sugar doesn’t usually pass through the same stages as described below.

Sugar cane juice is evaporated. As the water evaporates from it, crystals start to form. The thickened mixture with the crystals in it moves onto a perforated centrifugal pan, where it is spun and dried, leaving just the raw sugar crystals behind, which are 96 to 98% sucrose.

The impurities still remaining are plant material and minerals, in the form of a thin film of molasses that remains on the crystals, giving them their brownish colour.

Further processing now begins into white sugar, brown sugar (where molasses is added back in), etc. It is often shipped as raw sugar to other plants for this further refining.

The further refining includes washing the raw sugar in a sugar-water solution to loosen the molasses coating, then spinning it. The remaining liquid then has any remaining colour filtered out with carbon filters. The water-sugar syrup is then evaporated under vacuum, causing the crystals left behind to transform into fine sugar crystals. The crystals are dried further and you now have refined sugar. To sort the sugar by granule size, it is then passed over screens that the granules will fall through based on their size. Then, the refined sugar is finally packaged and shipped.

Raw sugar can be bought more easily in Europe than it can be in North America. As of 2005, 70% of the raw sugar imported into the European Union (EU) was processed in east London by Tate & Lyle.

Raw sugar dissolves slower than refined sugar, so it good for sprinkling on top of baked goods.

The nutritional difference between raw sugar and refined sugar is so minuscule that you’d have to eat literally truckloads of Raw Sugar to gain any nutritional advantage — that’s minus, of course, all the disadvantages of consuming all that sugar.

Some health authorities, such as Health Canada and the American Food and Drug Administration, don’t consider raw sugar fit for human consumption.

Leaving the impurities in the sugar shortens its shelf life compared to refined sugar.