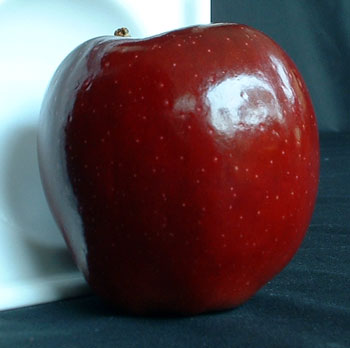 Red Delicious Apples have a red, tough skin and a coarse texture. Inside, they are juicy and sweet.

A Red Delicious is one of the cheapest apples around to buy, owing to the quantity produced. Almost half the apples grown in America are Red Delicious.

Apple lovers have a problem with the “delicious” part of the name. They say these apples are far more delicious when tossed into other people’s lunch bags, as the flavour can very widely, and they are heartily sick of them.

Better for eating fresh than cooking; falls apart when cooked and flavour evaporates.

The Red Delicious Apple tree was found as a chance seedling on farm of Jesse Hiatt of Peru, Iowa in 1872. At first, Jesse chopped it down twice, but it kept growing back, so he finally allowed it to live and bear fruit. The seed that the seedling sprang from probably came about as a cross between Yellow Bellflower and either Black Gilliflower or Sheepnose. Hiatt entered the apple in a competition in 1893, calling it Hawkeye.

A nursery called Stark Brothers Nursery bought the rights for the apple and renamed it to Red Delicious, but there remains today a variety of it still called Hawkeye (and some say the taste of the Hawkeye is better).

By the 1920s, this apple practically owned the market around the English-speaking world.