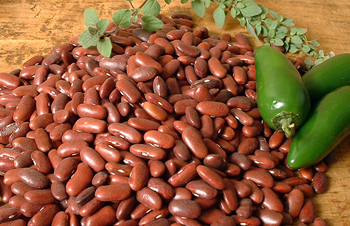 These are red-coloured, 1 cm (½ inch) long beans shaped slightly like a kidney (they are actually more maroon coloured than red.) Their skin colour is solid with no markings. They cook up to a full-flavoured, smooth texture.

There are also white kidney beans, which have a milder flavour. The white ones are also known as cannellini beans.

You can buy red kidney beans canned, or dried. The dried ones need full cooking before use.

Rinse canned ones in a colander, then proceed with your recipe.

For pressure-cooking, either (a) soak overnight first for 12 hours, and then cook for 5 to 8 minutes on high, or, (b) unsoaked, 20 to 25 minutes on high. How long exactly will depend on how “old” the dried beans were and how much pressure your cooker operates on exactly under “high.” Add 750 ml (3 cups) of water for each 250 g (1 cup) of beans whether working with soaked or unsoaked. You may wish to add a bay leaf or two to the pot. Add 1 tablespoon of oil to the cooking water to prevent vent clogging.

If you are making chili, and are thinking of cooking the dried beans right in the chili, don’t. Always cook them first separately to ensure full proper cooking of the beans for food safety reasons. And from a culinary standpoint, the acid from the tomatoes will keep the bean skins tough.

Kidney beans, whether white or red, should never be eaten raw as they contain trace amounts of a toxin that is destroyed by cooking.

“According to the FDA [U.S. Food and Drug Administration], eating as few as 4-5 uncooked kidney beans can cause severe nausea, vomiting and diarrhea in 1-3 hours after ingestion. Uncooked kidney beans have an unusually high concentration of a chemical called phytohaemagglutinin that is destroyed when the beans are properly cooked by boiling.” [1]Meimann, Liz. Eating Raw Kidney Beans Can Be Toxic. Iowa State University. June 2013. Accessed July 2022 at https://blogs.extension.iastate.edu/answerline/2013/06/03/eating-raw-kidney-beans-can-be-toxic/

Phytohaemagglutinin is what is known as a “lectin”:

“Lectins are widely occurring, sugar-binding proteins, but some of them may become toxic at high levels. Lectins are known for their ability to agglutinate many mammalian red blood cell types, alter cell-membrane transport systems, alter cell permeability to proteins, and generally interfere with cellular metabolism, according to the Food and Drug Administration. Among the lectins known to have toxic effects is phytohemagglutinin (PHA)…” [2]Pilet, Jonan. How to avoid poisoning from red beans. Food Safety News. 3 May 2021. Accessed July 2022 at https://www.foodsafetynews.com/2021/05/how-to-avoid-poisoning-from-red-beans/

“One antinutrient present in beans that deserves special attention is phytohaemagglutinin (PHA). PHA is a special protein than binds sugars, and it is an important component in a plant’s defense system. But in mammals this protein can bind to intestinal walls, causing nausea, vomiting, cramping, and diarrhea (Kumar et al., 2013). Even a small amount of PHA can have a negative effect on health. You may not consume enough to become noticeably sick, but continued exposure can result in poor growth, malnutrition, or liver damage. PHA is present in many types of dry beans. For beans that are commonly available in the U.S., the highest levels are found in dark red kidney beans and black (turtle) beans (Bender, 1983). Research has shown that the amount of PHA is negligible in other types of dry beans that are regularly consumed in the U.S. PHA is very heat stable, and acid (such as tomatoes) increases this stability. This makes proper cooking of red kidney beans very important.” [3]Allen, Karen and Debra Proctor. Killer Kidney Beans? Utah State University Extension Service. October 2014. FN/FQE/2014-01pr

To ensure that the toxin is destroyed, it’s recommended that red kidney beans be boiled for at least 10 minutes and preferably up to 30:

“It has been found that boiling the beans for 10 minutes at 100 degrees C (212 degrees F) completely destroyed the toxin. To be safe, consumers should boil the beans for at least 30 minutes to ensure that the product reaches sufficient temperature, for a sufficient amount of time, to completely destroy the toxin.” [4]Pilet, Jonan. How to avoid poisoning from red beans. Food Safety News. 3 May 2021. Accessed July 2022 at https://www.foodsafetynews.com/2021/05/how-to-avoid-poisoning-from-red-beans/

Do not try to cook raw red beans in a slow cooker:

“Slow cookers should not be used to cook the beans or dishes that contain them. Studies of casseroles cooked in slow cookers revealed that the food only reached internal temperatures of 75 degrees C (167 degrees F) or less.”  [5]Pilet, Jonan. How to avoid poisoning from red beans. Food Safety News. 3 May 2021. Accessed July 2022 at https://www.foodsafetynews.com/2021/05/how-to-avoid-poisoning-from-red-beans/

Some sources suggest that attempting to cook them in a slow cooker may make matters even worse:

Consequently, add only already-cooked red kidney beans to dishes being assembled in a slow cooker.

Attempt to cook red kidney beans from scratch in a microwave is not recommended, as the toxin may not be inactivated:

“Microwaves do not heat food evenly. This can cause parts of each bean to be undercooked even if the rest is overcooked. Because of this, microwave cooking is not recommended.” [7]Allen, Karen and Debra Proctor. Killer Kidney Beans? Utah State University Extension Service. October 2014. FN/FQE/2014-01pr

For food safety reasons, it is best to discard the water that red kidney beans cold-soaked in overnight.

Kidney beans are a New World food and were brought over to the Old World by the Spanish. The word “kidney bean” was first used in England in 1551, as people began needing to distinguish New World beans from those that had already pre-existed in Europe.

The name “kidney” bean comes from the shape. They are called “Red Peas” in the Caribbean.