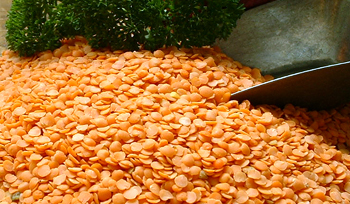 The names of these varieties include Crimson, Redwing, Redcap, Robin and Blaze. In India, this kind is more generally just referred to as “masoor dahl.” In America, a popular variety is Red Chief, which grows with a tan skin on the lentils.

Some feel that hulled Red Lentils have less taste than other lentils, as a lot of the flavour was in the skin.

Red Lentils will cook to form a purée, while Green (aka Brown) Lentils stay more whole and separate because they have their skins on — thus these are better for salads and stews, while red are good for soups, etc.

All Red Lentils turn a golden colour when cooked.

Don’t presoak. Will cook in about 10 minutes, and after that turn to mush, so test them as they approach the ten minute mark and if you need them to stay intact for what you are making, be ready to whistle them out of the water. To get them puréed, let them simmer for about 20 minutes.

Any kind of lentil.