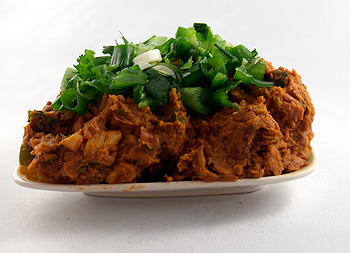 Refried Beans is Mexican dish consisting of cooked beans which are mashed and seasoned.

The mixture should have a creamy texture and be thick enough to eat with a fork. The dish won’t have an overly attractive appearance — it is very hard to photograph Refried Beans and make look them appetizing — but owing to the texture, the satisfying mouth feel and the seasoning, they can be a very “morish” dish.

Refried Beans can be served hot, room temperature or cold, as a main dish, side dish, a filling, a garnish or a dip.

The traditional bean to use for Refried Beans in some parts of Mexico is Pinto. The dish can also be made with red kidney beans, black beans, or a mix of beans. In Oaxaca, Mexico, black beans are more common to use than pinto beans.

The beans must be first be simmered until very soft to be mashed successfully. Then they are drained (with some of the cooking water preserved), and mashed. The mash is then seasoned, and fried in a fat such as lard or oil in a pot or skillet. Lard gives the dish a meatier flavour. Some of the reserved cooking water may be added to make the mixture moister. Traditional seasoning includes salt, onion and possibly cumin, garlic and oregano.

There are many Tex-Mex variant recipes now.

Refried Beans are available canned. The oldest canned brand is believed by some to be “Old El Paso.”

The Canadian food writer Diana Kennedy is considered by many to be the English-speaking authority on Refried Beans. 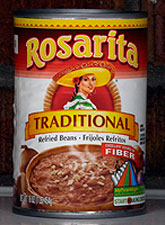 You can get canned fat-free versions, but canned versions can be high in sodium.

It is hard to get a low-fat version of Refried Beans to be right, as the fat is what gives the beans their mouth feel. Some say use a vegetable oil instead of lard — but fat is fat is fat, whether the source is animal or vegetable. Others say use chicken stock, though purists reply that then you are basically making bean soup.

The earliest newspaper recipe for Refried Beans that we
find in America is in an ad. It’s not overly authentic.
Morning Avalanche. Lubbock, Texas. 9 February 1951. Page 13

The first mention we find of Refried Beans in American newspapers is the Hotel Moctezuma in Matamoros, Mexico advertising refried beans as part of a 50 cent lunch (Brownsville Herald, Brownsville Texas, 30 September 1911, page 2.)

There’s really no mention of Refried Beans in American papers outside Texas until the start of the 1950s, when you start to see a few mentions happening in Arizona and California, and those are usually for tinned products or mentioning them as part of a menu, along with “Spanish Rice.”

“I like refried beans. That’s why I wanna try fried beans, because maybe they’re just as good and we’re just wasting time. You don’t have to fry them again after all.” — Mitch Hedberg (American comedian. 24 February 1968 to 29 March 2005)

In Spanish, Refried Beans are called “frijoles refritos.” “Frijoles” means “beans”, “frito” means fried. Most English speakers can be forgiven for thus thinking the Spanish name actually means “refried beans.” It does not, however. In Mexican Spanish, “re-” does not mean “again” as it does in English and Spanish Spanish. Rather, it means “very” or well.” Thus, the name in Spanish actually means “very well fried” beans. Which makes sense — because the beans are not “refried”, as in fried twice — they are only fried once.

The correction was made for English speakers back in 1934 by Erna Fergusson in her book entitled simply “Mexican Cookbook”, but never gained popular knowledge. [Mariani, John F.. Encyclopedia of American Food and Drink. Lbghar-Friedman. 1999. Page 268]