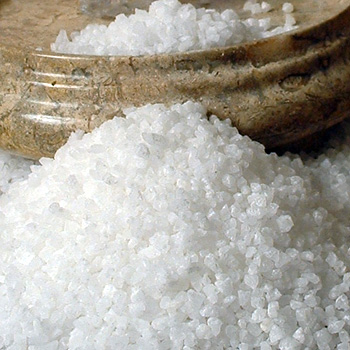 Rock Salt is a coarse-grained salt obtained from the ground, as opposed to evaporated from seawater.

The consumer sees it in largish, chunky crystals, because it’s not been ground down to be as fine as table salt. It therefore dissolves less quickly than table salt.

There are both food and non-food uses for Rock Salt.

For use in the kitchen, the Rock Salt needs to be food-grade rock salt, which has been purified.

This Rock Salt can be used in picking and curing, or to make salt crusts for food. In Italy, it is added to water being boiled for pasta.

In North America, it is perhaps best known for being used to reduce the temperature of ice in ice cream machines.

Any salt would reduce the temperature of the ice. Historically, Rock Salt was traditionally used because it was noticeably cheaper owing to its being processed less. That’s no longer necessarily the reason it is still used for this purpose, though, because refined table salt is actually cheaper now owing to large volume sales.

The reason Rock Salt is still preferred over table salt in ice cream machines is owing to the very fine crystals of table salt. They interact with the ice more quickly, causing the ice cream mixture to freeze more quickly. You might think that is an advantage but you actually want your ice cream mixture to freeze slowly. If it freezes too quickly, you’ll get very large ice crystals in it, making the resultant ice cream grainy and gritty and less creamy. Rock Salt interacts with the ice at the right speed.

Industrially, Rock Salt is referred to as “halite.” For for non-kitchen uses, the salt is not purified. It is often greyish, and often also treated with chemicals. In this form, it is used in the winter for roads, sidewalks, etc.

‘The so-called nouvelle cuisine usually means not enough on your plate and too much on your bill.’ — Paul Bocuse (French chef. 11 February 1926 – )