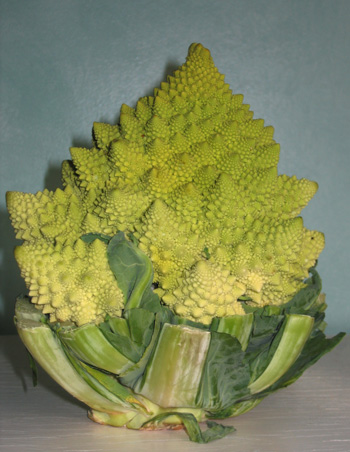 Romanesco Cauliflower is best defined by describing how it is not like regular cauliflower. Like cauliflower, the heads are large and tightly-formed, but the heads are a pale lime green that seem to spiral upwards with pointed cones forming the spirals. It almost resembles at times a formation of sea shells. The heads are small, averaging about 4 inches in width (10 cm.)

Romanesco retains its colour after cooking. The taste is milder and sweeter than that of white cauliflower.

It fetches a higher price at stores than regular cauliflower, both because the seed is substantially more expensive, and because the fully-grown cauliflower requires greater care in shipping to ensure that the spiralled-cones don’t shatter and break off.

Choose firm, small heads with crisp outer leaves, with no bruises or discoloration on them.

Trim off outer leaves (they can be cooked separately like cabbage, if you wish.)

Cook and prepare as for regular cauliflower. Cook in boiling water for about 10 to 12 minutes until tender to the fork, or steam until tender, about 5 to 7 minutes.

Store unwashed in fridge in a plastic bag for up to 1 week.

It has been grown in the Naples and Rome areas of Italy since at least the 1500s.

Commercial production of it in California started in the 1990s.

This web site generates income from affiliated links and ads at no cost to you to fund continued research · Information on this site is Copyright © 2022· Feel free to cite correctly, but copying whole pages for your website is content theft and will be DCMA'd.
Tagged With: Cauliflower