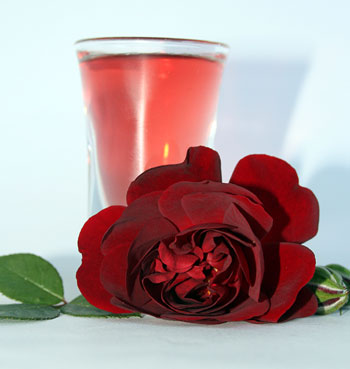 You can make rose water by simmering rose petals in distilled water until just half the water is left. Commercially, it is made by distillation. It is used in cosmetics and in cooking. Indian food, for instance, will use rose water in some recipes.

Rose water was widely used to flavour baked goods, until vanilla extract started to become popular and affordable in the mid 1800s.

If you bought rose water for Indian food and are looking for ways to use up the rest, consider sprinkling a small amount on fruit salads or fresh fruits such as strawberries that you are serving.

Some apple pie recipes have you sprinkle a tablespoon of rose water on top the apples.

As the Roman empire sank into decadence, some Emperors would use rose water to fill their baths and fountains. Some peasants were ordered to grow roses instead of food, to meet the demands of the imperial courts. In 17th Europe, rose water could be used as legal tender in some places.