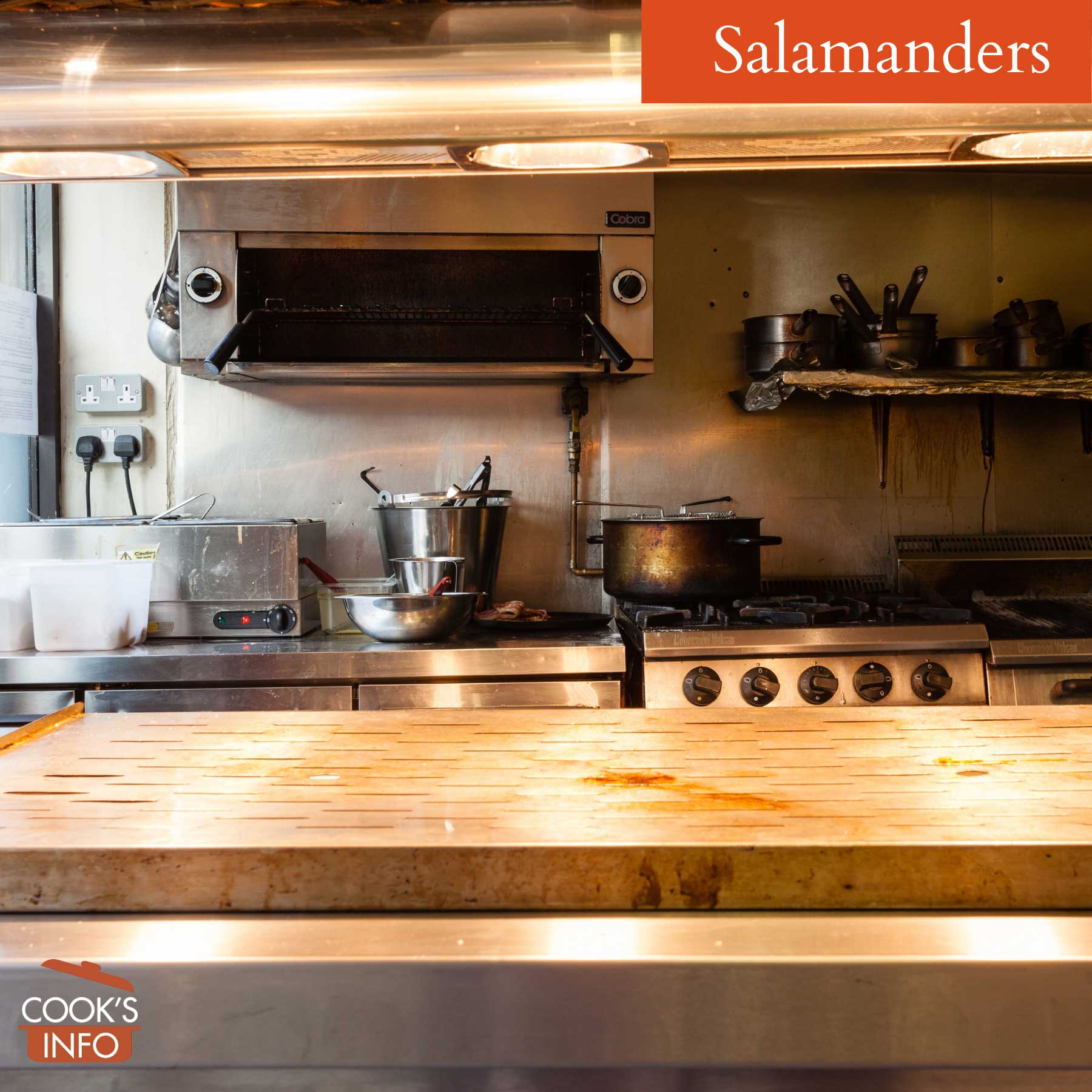 Salamanders are kitchen devices used for broiling, browning, caramelizing, glazing, grilling and toasting. They are generally used to put finishing touches on food, rather than cook them.

There are two forms of salamanders. One is hand-held; the other is like an oven.

A hand-held salamander consists of a metal rod, with a wooden handle at one end, and at the other, a heavy-weight iron disk disks about 7 to 10 cm wide (about 3 to 4 inches). It looks a bit like a branding iron, or a medieval weapon of torture.

Older forms of the hand-held salamanders had two rests attached to the rod, so that you could set it down with the metal disk end resting in an open fire. This was for when cooking involved hearths and fireplaces. The two rests allowed it to remain safely in place and let you get on with other things while it was heating up, instead of having to stand there and hold it.

To use, you heat the iron disk until it is very hot, glowing red even, then pass it over food. The heat radiating off the disk will brown, broil or melt the surface of the food it is passed over.

The upside is that you don’t need an oven to broil or brown the top of something. But it’s not always practical to use, away from a blazing fire in the kitchen hearth to heat it in. You can’t heat it well enough with electric burners; you really need gas burners. Your gas needs to be natural gas to get it red hot; propane probably won’t do it. And even with those, it can very hard to get it hot enough with the relatively low BTUs of most home gas burners.

Consequently, people turn to blowtorches instead for a hand-held heat source instead.

It is sometimes referred to as a “caramelizer” by retailers in America, in an effort to find a less-obscure name. 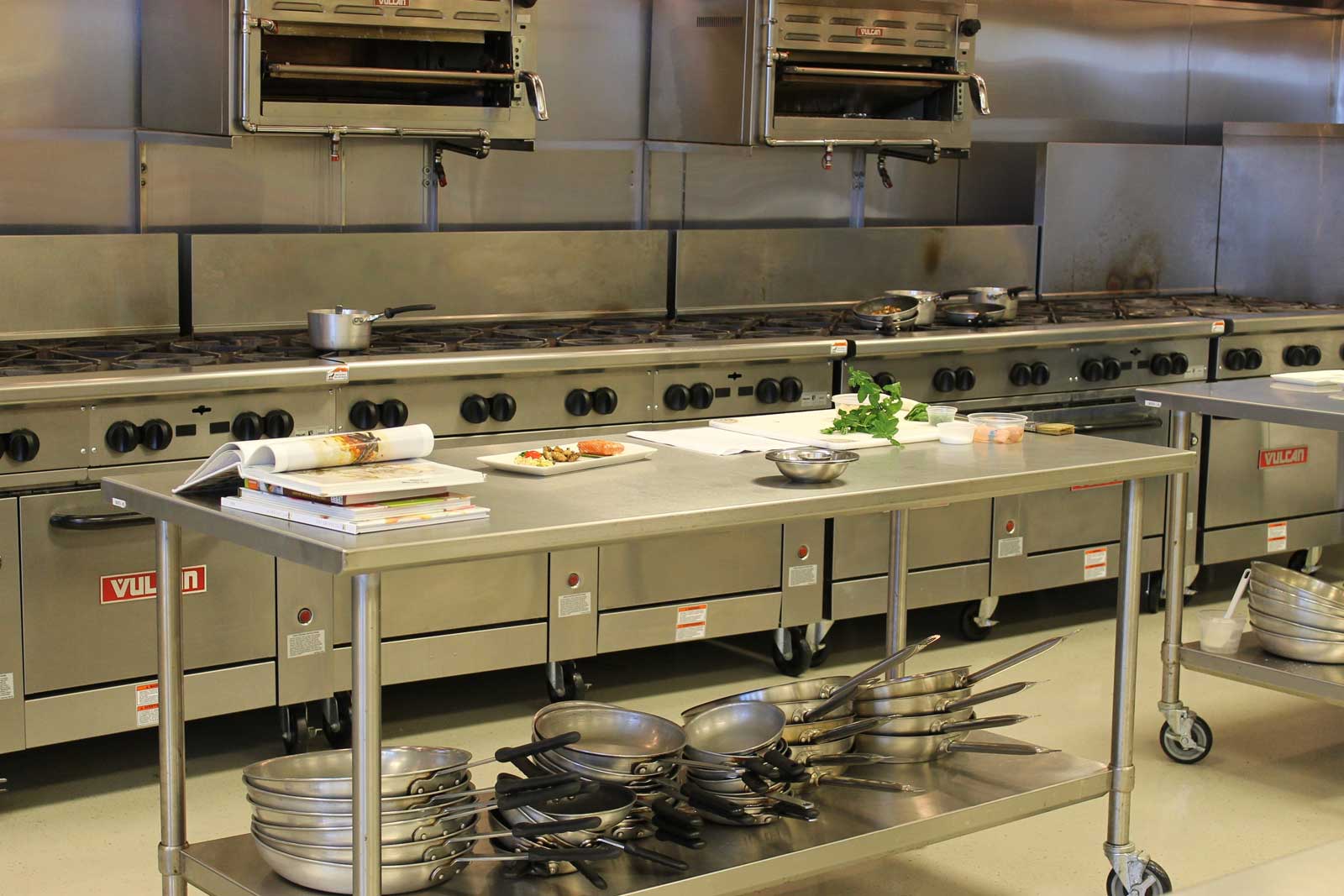 An oven-type salamander is an actual appliance which is gas or electric powered. It can be stand-alone or wall-mounted. Both kinds are designed to be eye-level so that you can easily watch, and access, the food placed inside.

It is a metal box about 1 metre wide (about 3 or 4 feet), and about 30 cm tall (1 foot) inside. There is generally no door on it at all. On the inside top of the oven will be mounted a long burner. A rack under the burner can be adjusted for height, and removed altogether.

The heat comes from overhead directly and intensely down onto the top of the food.

They get much hotter than a broiler (aka grill in the UK.) It is very hard to get one of these installed in your home. The heat is so intense that it may be impossible to get it installed to firecode, or to get it by your fire insurance people. Sometimes they are jokingly called “eyebrow broilers”, because being at eye level with such intense heat, you feel like your eyebrows are being singed off when you are close to one.

These use a lot of energy in restaurants, because they are left on all the time, ready to go.

In the UK, almost all home ovens have a dedicated salamander compartment, though it is referred to as a “grill.” This is generally above the oven, either right on top of it, bringing it waist level, or a separate “box” altogether right up at eye level. (Properly speaking, a grill should produce heat from underneath; overhead heat is produced by a broiler or salamander.) These dedicated home salamanders are used a great deal, far more than North Americans use their broilers.

In mythology, they acquired the reputation of being creatures that lived in fire. The Ancients believed that salamanders had powers to put out fire, and would even see fires as their sworn enemy and run into them to put them out. Some even believed at times that salamanders were born in fires.

Salamanders are real creatures, small lizards. Some salamanders live in water, some on land, but even those living on land have to live in damp areas, because they breathe through the skin, like their aquatic relatives, and if their skin dries out, they will die. Land salamanders would often, reputedly, hibernate or sleep in amongst damp logs. When the logs were collected and put on the fire and set alight, the salamanders would appear and scurry out. This perhaps gave rise to a belief that salamanders were born of fire.

This web site generates income from affiliated links and ads at no cost to you to fund continued research · Information on this site is Copyright © 2023· Feel free to cite correctly, but copying whole pages for your website is content theft and will be DCMA'd.
Tagged With: Broil, Cooking Tools