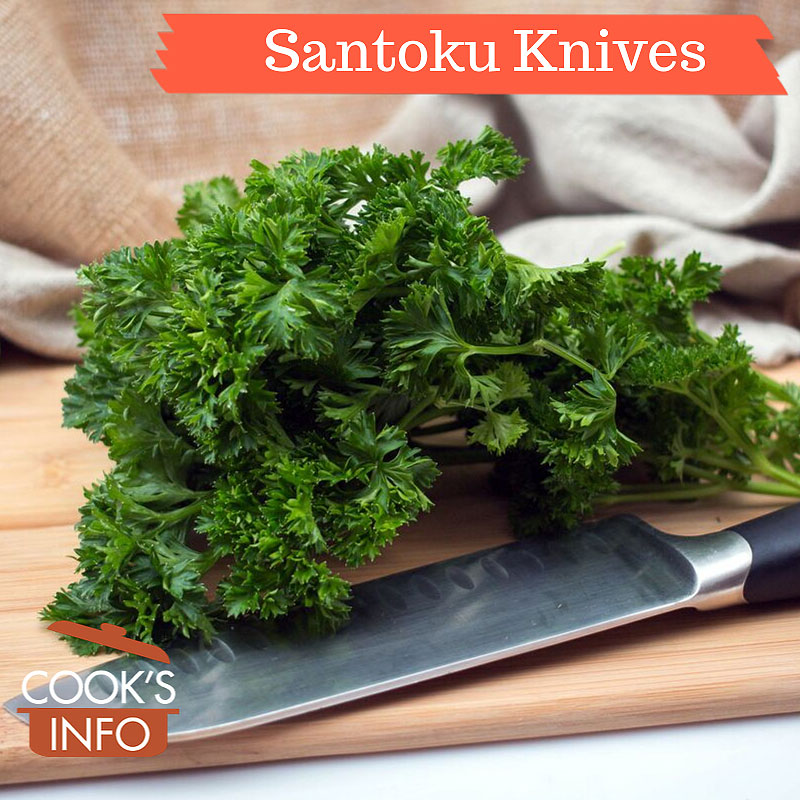 A santoku knife (三徳, sometimes “santuko”) is a Japanese knife that looks like a squat version of a French or German chef’s knife.

It is curved at the front, rather than pointy, and lighter than a chef’s knife, and overall not as heavy and thick.

The blade is broad, with the curve bringing the tip lower to the board. It is slightly tapered, and slightly thinner than the blade on a chef’s knife. The edge is honed at 17 degrees.

Because the tip is closer to the board, you don’t have to raise the knife as vertical as you do when using a French chef’s knife.

The handle is also lighter than that of a French chef’s knife, which brings the knife’s balance more out towards its tip. [1]”Compared to a Western-style handle, the lightweight traditional Japanese handle of the Wa Santoku knife moves the balance point of the knife further towards the tip, which makes it feel more nimble and precise.” — Bunka Knives. Seki-City, Gifu Prefecture, Japan: Kencrest Corporation. Accessed October 2019 at https://japanesechefsknife.com/collections/bunka

Sometimes a santoku has just a plain straight blade; sometimes it has a rippled cutting edge (the technical term is “granton edges.”) The ripples allow for fast cutting because they cause air pockets that don’t let the food adhere.

Most are made for right-handed people.

It is used for three purposes: meat, fish and vegetables. It is not good, though, for cutting through bone. Some people feel that it makes a poor fish knife and that if you really care about your fish, you will use a purpose-made deba knife instead.

“Cut your meat and your vegetables with the same knife! Fish too, of course, though probably you’ll do that with a deba like your mother taught you — fish is too important to mess around with… all-purpose knife; ill-designed for fish” [2]Lehrer, Chris. Some basics on Japanese knife history. Cheftalk.com. 24 October 2009. Accessed October 2019 at https://cheftalk.com/threads/some-basics-on-japanese-knife-history-long.56934/

Difference between a santoku knife and a bunka bocho knife

Some people say the santoku is the same as a Japanese Bunka Bocho knife, but compared to the bunka, the santoku’s blade is narrower, and its pointed tip curved rather than blocky. [3] “With its wider blade… The main difference between the Santoku and the Bunka Bocho lies in the shape of the blade tip, with the Bunka Bocho having a ‘reverse tanto’ tip / ‘clip point’, rather than a curved Kamagata (“Sickle-shaped”) tip”” — Bunka Knives. Seki-City, Gifu Prefecture, Japan: Kencrest Corporation. Accessed October 2019 at https://japanesechefsknife.com/collections/bunka

Chris Lehrer, a Japanese knife enthusiast and frequent writer on the topic, gives his take on the pros and cons of santoku knives:

“Pros: Good for small spaces. Good for those terrified of large knives. Some say it’s good for women’s hands, but I say this is chauvinism. Versatile. Easy for the hardware store or a machine to sharpen.

Cons: Not as good as a French chef’s knife at anything. Expensive for what it is. Brilliant at nothing. Regular honing (steeling) is wise.” [4]Lehrer, Chris. The Best Kitchen Knives: A Complete Guide to Creating Your Perfect Set. Knifeplanet.com. 4 April 2017. Accessed October 2019 at https://www.knifeplanet.net/best-kitchen-knives/

“The Santoku knife is a general purpose knife which resembles a cook’s knife in appearance. It is thinner and shorter and combines features of both Nakiri and Gyuto. This knife measures between 5 to 7 inches, has a flatter edge and is angled dramatically up to 60 degrees. This knife permits rock-chopping with its slight angle towards the cutting edge… The height and tip shape makes it ideal for scooping food. This knife can be used for numerous cutting jobs. It is perfect for cutting and chopping. However, it is not possible to slice up meat or fish because of lack of blade length. Santoku knives are known for their versatility as a kitchen implement. These widely-used Japanese knives are typically the first Japanese kitchen knife given or purchased.” [5]The Ultimate Guide to Japanese Kitchen Knives. 11 July 2018. Accessed October 2019 at https://tokyoknives.com/blogs/news/the-ultimate-guide-to-japanese-kitchen-knives

According to Chris Lehrer, santoku knives emerged for home use roughly about the start of the 1900s. [6]Lehrer, Chris. Some basics on Japanese knife history. 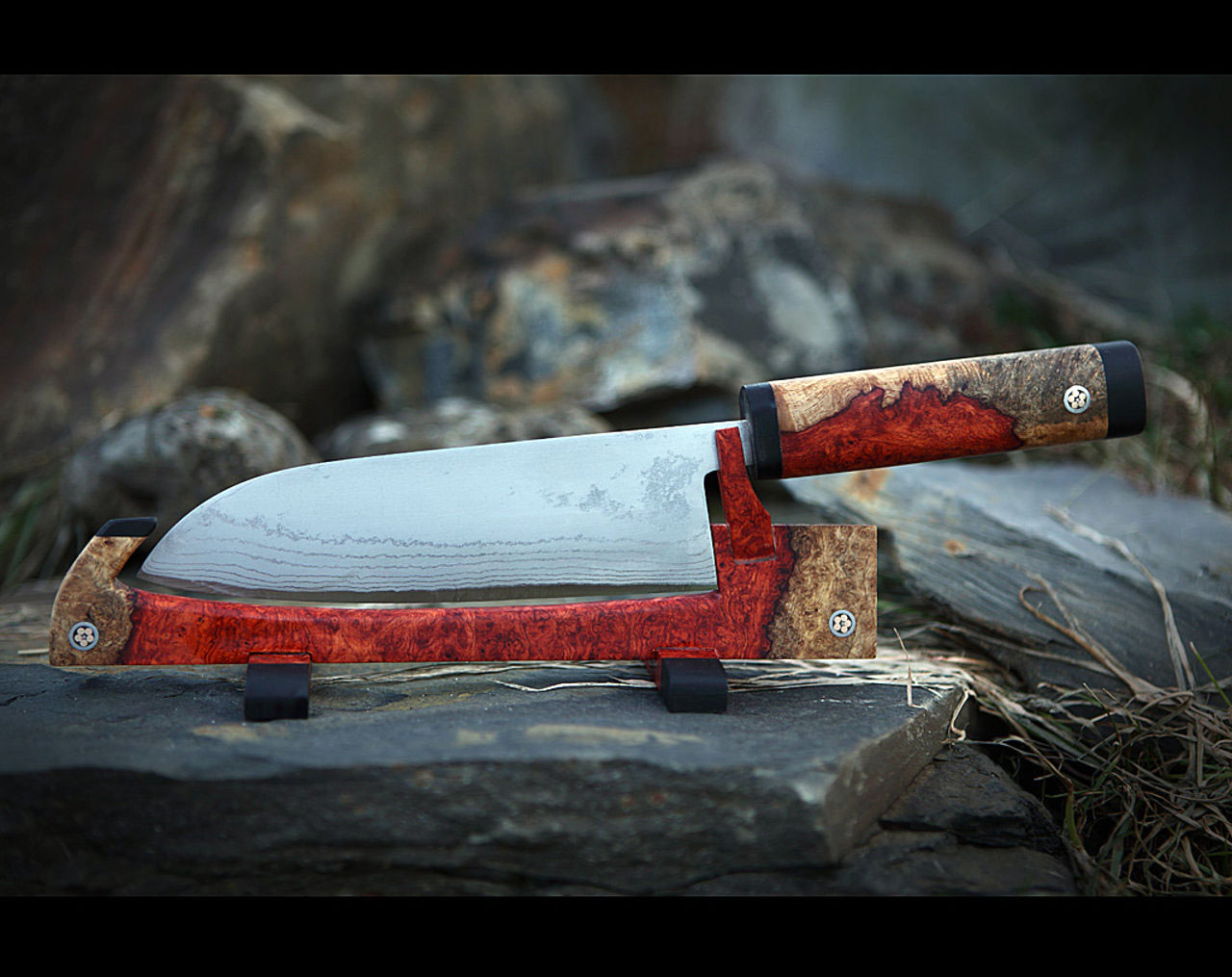