×
You are here: Home / Recipes / Beef Recipes / Shit on a Shingle Recipe

Shit on a Shingle (SOS) is a US military food term — unofficial, of course!

It is a dish consisting of a cream sauce with meat in it poured over toast. It is often served as a breakfast dish.

There are some variations, though, and what it means exactly can depend upon which branch of military service it is being served in. See here for the history of shit on a shingle. 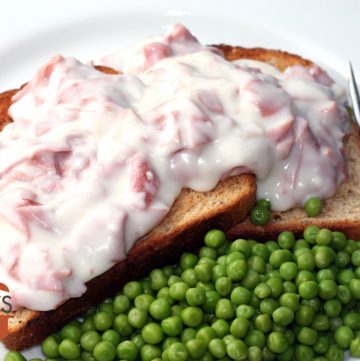 Shit on a Shingle Recipe

CooksInfo
Shit on a Shingle made with creamed, chipped beef is a classic American military dish. This recipe makes enough for one person for lunch or a light supper; you can easily multiply this recipe as needed. We've tried to make it just a bit healthier than normal by lightening up the white sauce.
Print Recipe Pin Recipe
Prep Time 10 mins
Cook Time 5 mins
Total Time 15 mins
Course Beef, Lunch
Servings 1

You can use white or brown bread. If you aren't counting calories, regular milk is fine -- we just tried to make the dish a bit lower in calories. 1/3 cup is about 3 oz or 75 ml. Feel free to use a bit more to make the sauce runnier if you like. Feel free to adjust and play with seasoning; most people seem to feel it's salty enough from the beef without adding more salt.
Tried this recipe?Let us know how it was!

Nutrition will vary wildly based on the bread and meat you used, and the sauce you made.