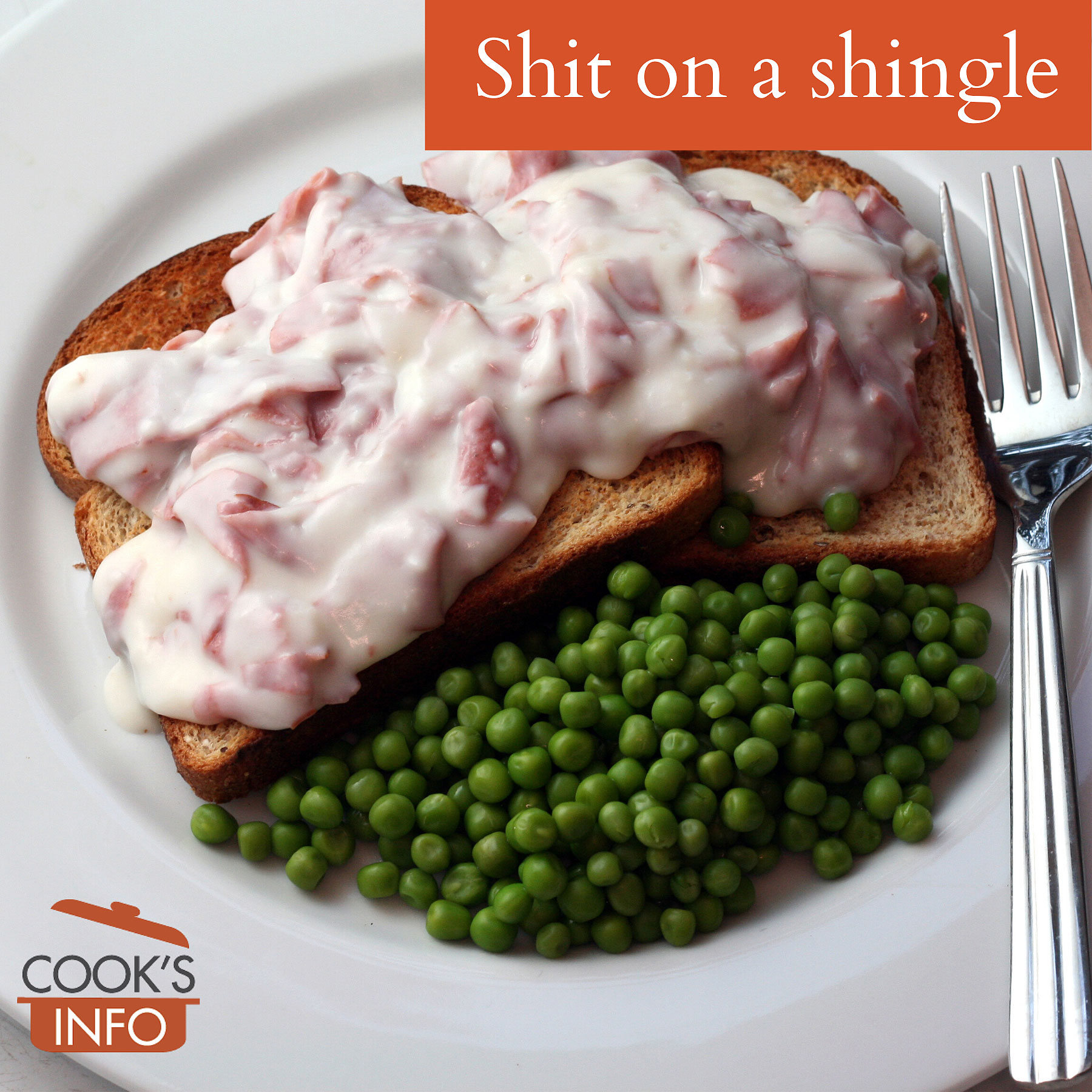 Shit on a shingle (SOS) is an (unofficial) U.S. military food term.

It generally implies some kind of meat in a sauce, served over toast (the toast being the “shingle”), often served as a breakfast dish. What it means exactly, though, depends on which branch of military service is referred to, and when.

Creamed chipped beef is one dish that has been referred to as “shit on a shingle.” It is chipped beef, chopped into small or medium-sized pieces, stirred into a thick or medium-thick cream sauce, and served over toast. There’s no standard for ratio of meat to sauce, or thickness of the sauce.

The recipe for it (officially named “Creamed Chipped Beef”) first appeared in the military universe in the 1910 edition of the “Manual for Army Cooks.” [1]War Department. Army Recipes Technical Manual (TM) 10 412. 1st Edition August 1944. It was beef stock and evaporated milk thickened with a roux, seasoned with parsley and pepper. The chipped beef was added just before serving, so that the salty taste of it didn’t permeate the sauce overly. By the 1940s, the sauce recipe had become thicker by leaving the beef stock out, and the parsley was dropped. Army cooks, even though not directed to do so by the recipes, would apparently often soak the beef overnight in water to leach some of the excess salt out.

You can now buy canned, ready-made creamed chipped beef. Nestlé sells one, with the beef in a “seasoned white sauce.” They add white cheese in their version for extra interest.

You can also buy frozen versions, and pouch heat and serve versions.

Some people like to garnish their SOS with boiled, chopped egg for more flavour and colour.

Some people at home made a version using a can of cream of mushroom soup as the sauce, adding only part of the milk that the soup called for.

In the American navy, “shit on a shingle” was a minced beef and tomato sauce flavoured with onion and nutmeg and served over toast. The sauce would be thickened with flour or cornstarch.

Beginning in the late 1960s, some parts of the US military began to use ground beef for the dish that people called “shit on a shingle.” The army version with ground beef stuck with a cream sauce, made from evaporated milk and beef stock thickened with a roux. You fried the ground beef, drained excess fat, stirred flour into the ground beef, letting its fat interact with the flour to make the roux, and then made the sauce from there, either with evaporated milk or reconstituted powdered milk.

Shit on a Raft

The British Royal Navy’s version was sauteed kidneys on toast, which they called “Shit on a Raft (SOR.)

The following recipe for “shit on a shingle” is from the 1910 edition of the “Manual for Army Cooks.” It yields servings for 60 men.

Brown the flour in the melted fat. Dissolve the milk in the beef stock, and then add that to the pot. Stir this together slowly to prevent lumping, and then add the beef. Cook for a few minutes, add the parsley, and serve over toast.

The following version of shit on a shingle is from April 1957, in: TM 10-412-1, “Department of the Army Technical Manual. Army Recipes (Meat, Poultry, Fish, Gravies, Sauces and Dressing.)

No. A-34 Creamed Ground Beef on Toast.

100 servings of 1 cup each. Preparation and cooking time: about 1 ¼ hours

Brown beef in its own fat in roasting pans on top of range. Remove excess fat during cooking period.

Add 3 gallons of milk to beef mixture and heat to simmering, stirring frequently.

Mix flour with the remaining gallon of milk and stir into hot mixture. Bring to a boil, stirring steadily, reduce heat and simmer until thickened.

This web site generates income from affiliated links and ads at no cost to you to fund continued research · Information on this site is Copyright © 2022· Feel free to cite correctly, but copying whole pages for your website is content theft and will be DCMA'd.
Tagged With: American Food, Military Food