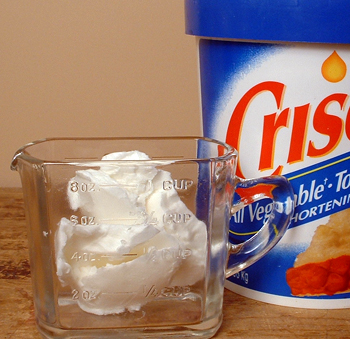 Shortening is a solid white fat product made from vegetable oils, using the technique known as hydrogenation discovered at the beginning of the 1900s.

The word is older than that, though. At the beginning of the 1800s, “shortening” was a generic term used to describe fats or oils added to baked goods to “shorten” or break up gluten masses, weakening the gluten structure to produce a more tender result. Thus, shortbread, made with flour which has gluten in it, has a mass of butter added to “shorten” the product and make tender shortbread cookies.

Shortening certainly acts like this in pie crusts. Its role in cake batters, however, is a bit different. Part of the reason for creaming butter with sugar is that the sugar crystals cut into the butter allowing air in and air cells to be created in the butter. Well, commercial shortening is like creamed butter without the sugar, as it already has the air cells in it. It further tenderizes a cake by separating starch in the cake from coagulating protein — not to mention that the added fat makes the cake taste moister and smoother.

Hydrogenation helps make shortening a solid, flavourless fat product that will keep its form regardless of room temperature, and not puddle or pool like butter or other animal fats do on hot days or in warm rooms. The disadvantage is a health one: the process creates trans-fatty acids and saturated fat which is bad, and destroys the normal polyunsaturate benefits of the vegetable oil that it started from.

In France, the predominate brand, which is called “Végétaline”, is made from hydrogenated coconut oil.

Which is better for pie crusts, lard or shortening? Well, scientifically, it’s lard. Shortening has smaller molecular crystals than lard, which is good, because the smaller crystals mean that more air can be trapped between them, which is great when you want something to rise. Lard, though, has larger crystals and less air between it, and you really don’t want pie crusts to do any rising. As for using Shortening rather than lard on a “health” basis, remember that while both are saturated fats, Shortening also contains trans-fats.

Unless a recipe says otherwise, you should use shortening cold — such as in crusts, biscuits, dumplings, etc.

Because shortening is essentially flavourless, you can use it as a substitute for mostly any other fats in baking or cooking. You can use it to fry in, or use when a recipe calls for butter or lard.

Instead of shortening, you can use butter, margarine, lard or dripping when a solid fat is required — for instance, for working into pastry or dough. When shortening will be melted and then added to a recipe in a liquid state, or when it is melted and used for frying, then a vegetable oil could be used instead.

Nutrition will vary by brand. Most will almost certainly contain saturated fats. In 2007, Crisco was reformulated to eliminate trans fat.

You can store shortening at room temperature for up to a year. Many North Americans, though, have always kept it in the refrigerator, and panic when it has been left out of the fridge on the counter for a short while — even though they bought it off an unrefrigerated store shelf. Storing it in the fridge, though, would extend the storage life, and does keeps it cold and ready to go for pastry. 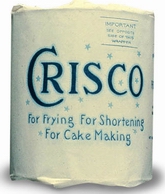 The world’s most famous Shortening, Crisco, first hit the market in 1911. Procter & Gamble introduced it as a less-expensive alternative to animal fats and butter — it was the first Shortening made entirely from vegetable oils. The white paper wrapping would have emphasized to consumers the purity of the product, compared to some of the animal fats sold at the time. What made Crisco possible was the discovery of the hydrogenation process, which let P & G make Shortening that would stay solid regardless of temperature.

[Ed: some sources feel that Snowdrift Shortening (made from cotton-seed oil purified in the process discovered by David Wesson in 1899) was the first all-vegetable-oil shortening, but they do not give a year to support their claim.]

Many budget-conscious households came to use Shortening a great deal in their baking as it was more economical than butter. This was particularly true in areas where another alternative, margarine, was either banned or subject to prohibitive taxes.