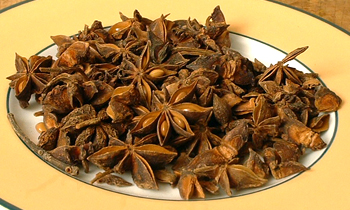 The tree that Star Anise Fruit comes from is called the “Indian Almond.” The tree can grow up to 25 feet (8 metres.) It’s an evergreen that will grow true to seed, and so is propagated that way.

The fruit is quite small, only about 1 1/4 inches tall (3 cm.) It grows in the shape of a star, with anywhere from 5 to 10 points, though the average is a minimum of 8 points. The fruit is picked unripe, then dried in the sun to a brown colour. The fruit is always dried, and never eaten fresh.

Once dried, it is mostly ground up into a reddish-brown powder for use as a spice. The whole fruit is ground, as is. The flavour is actually in the fruit itself, not the seed. The powder has a more pronounced liquorice taste than does anise, as well as being sweeter than Anise. In China, the powder is used in the spice mix called Five Spice Power. In the West, it is used in the West mainly as a substitute for Anise, which is more expensive.

China is still the major exporter, though Star Anise Fruit is now grown as well in the Philippines and even in Jamaica.

People who don’t like the taste of liquorice will advise you to use Star Anise Fruit powder sparingly; others, who love the taste, will have you toss a few whole dried fruits in. If you do use whole fruits, you always remove them before serving, and discard.

Recipes will often just call for a piece of a star.

Store whole, unground dried fruits in a sealed container for up to 2 years. Even when you think the whole ones have no aroma or taste left to them, they will still release a lot of aroma and taste the instant you grind them up.

Native to Southern China. First brought to Europe in the 1600s.

The first part of its botanical name, Illicium, comes from the Latin word “illicere”, meaning “allure”, referring perhaps to the sweet aroma.

In very old recipes, you may see it referred to as “Badian Anise”.

This web site generates income from affiliated links and ads at no cost to you to fund continued research · Information on this site is Copyright © 2021· Feel free to cite correctly, but copying whole pages for your website is content theft and will be DCMA'd.
Tagged With: Asian Food, Spices