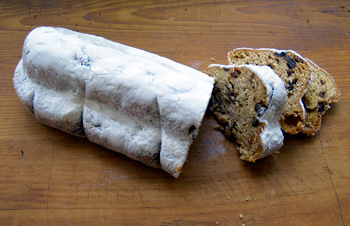 Stollen is a yeast-risen fruit and nut bread made particularly at Christmas in Germany.

It comes in various sizes, up to 2 kg (4.4 pounds). In theory, the long, flattened oval shape of the loaf is meant to resemble a baby wrapped up in a blanket. It is often packed in cardboard boxes for easy shipping and gift giving.

The bread dough is actually not all that sweet. It is made from yeast, water, salt and flour, and depending on the recipe (many of which are kept secret), may be enriched with milk, butter, eggs, citrus zest, and / or sugar.

The fruit mixture consists of things such as currants, candied orange peel, candied lemon peel, nuts and raisins, tossed with cardamom, cinnamon, cloves, mace, nutmeg, etc. Some of the fruits may first be soaked in brandy or rum.

Some recipes will have you mix the fruit into the dough. Other recipes have you let the dough rise, then flatten it out, put the fruit in the middle of the risen dough, and fold the dough over to contain the fruit filling. Still others may do either of these, and have you fold the dough over some marzipan so that it becomes the featured filling. If a recipe calls for marzipan, it is less likely to call for almonds as one of the nuts.

The dough is then formed into its customary shape, with a off-centre seam on top running down its length, let rise (again), then baked. When baked, the bread is often powdered with icing sugar. Brushing the loaf with melted butter first can help the sugar adhere better.

Austrian versions will have fruits such as cherries, apricots and pineapple in them.

Dresden, in Saxony, Germany, is considered the birthplace of Stollen. There, Stollen production is governed by an association called the Stollenschutzverband (“Trade Protection Society for Dresden Stollen”.) Production is restricted to 150 bakers in Dresden.

Official Dresden-labelled Stollen has a seal on it showing King Augustus II the Strong. In 1730, Augustus had a 1.8-tonne Stollen made for a celebration held that year. It was not actually a Christmas event, as it was held in the summer; it was rather a series of military parades designed to impress other German monarchs such as Friedrich Wilhelm I, King of Prussia.

Records at the Christian Hospital of St. Bartholomew show early versions of Stollen being made at Christmas in Dresden since at least 1474. These early versions were made of oats, flour, water, and vegetable oils, with no butter, because the use of butter during Advent was restricted.

In 1486, Prince Ernst von Sachsen (1441 – 1486) and his brother Duke Albrecht (1443 – 1500) applied to Rome for an exemption for the use of butter. [1] In a letter dated 28 July 1490, Pope Innocent VIII (Pope from 1484 – 1492) agreed to allow their private use of butter during Advent, provided no more than six people were at their table. On 6 July 1491, Innocent agreed to extend the use of butter during Advent to bakers in Dresden, in exchange for an annual donation of 1/20th of a Rhine Guilder to the building of churches such as the Freiburg cathedral. One-quarter of the monies raised would go to the basilica construction fund in Rome. This letter is variously referred to as the “Bittbrief” or “Butterbrief”. [2]

Up to 1918, a small festival was held each Christmas in Dresden during which Stollen bakers presented a Stollen to the palace in Dresden.

Today’s Stollen festival in Dresden began in 1994, owing to the efforts of people such as Dr Peter Mutscheller, inspired by Augustus’ large Stollen. A huge Stollen is brought to the Christmas market in Dresden on the second Advent Saturday in December. After a ceremony, the massive loaf is then cut up into pieces and the pieces are given out in exchange for a donation to a charity.

[1] The history on this is very muddled. Some versions of the tale put the request in 1450 when the boys were small children; others put the request date before the two boys were born, or hundreds of years after they died.

Stollen used to be called Striezel many centuries ago, because there was a Christmas market held in Striezel, Germany.

Eventually, it was called Stollen because, reputedly, it reminded people of a mine tunnel entrance.