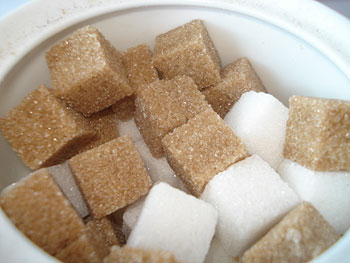 Sugar Cubes are cubes of sugar meant for table use. They allow a user of them to sweeten his or or beverage as desired. Generally, the beverages are hot, typically coffee or tea, as the cubes dissolve away very quickly into a liquid when the liquid is hot. They can be used to sweeten a cold drink, such as Iced Tea, but you will have to stir a great deal to encourage the cute to dissolve faster.

The cubes are made by pressing granulated sugar, mixed with a bit of sugar liquid to help glue them all together, into cube shapes.

Machines form them into cubes, air-dry them, then package them.

Most sugar cubes are made from refined white sugar, but you can also get them made from Brown Sugar, Demerara Sugar, etc.

A Sugar Cube dissolve from the outside in. Why it dissolves faster in a hot liquid is that it melts and loses its rigid form, creating more surface area and thus spending up the dissolving.

You can try making your own at home. Into 1/2 cup (4 oz / 115g) of sugar, mix around 1 teaspoon (15 ml) of water. You want it to feel like damp sand, but not to actually dissolve. Press firmly into decorative silicone ice cube trays, and let stand to dry for at least overnight, if not longer. (How much water exactly is needed, and how long it takes to dry, will depend on humidity of the room, etc.) Carefully press out of the moulds. You can use white or brown sugar. While using a food colouring might seem like an interesting idea at first, remember that the food colouring is going to interact with the colour of people’s coffee and tea potentially turning their drinks an unappetizing colour.

He was the director of a sugar factory in Dačice, Moravia, founded by Franz Grebner. His wife, Juliane, complained to him in August 1841 that sugar was only available in cones and lumps, which had to be hacked apart in kitchens — she’d cut herself one day doing this while preparing for guests. Three months later, he presented her with a case containing three hundred and fifty red and white sugar cubes produced at his factory. The cube shape was her idea.

Mary Johnson Bailey Lincoln, co-founder of the Boston Cooking School, called for cold Iced Tea to be sweetened with sugar cubes: “Iced Tea, or Russian Tea: Make the tea by the first receipt, strain it from the grounds, and keep it cool. When ready to serve, put two cubes of block sugar in a glass, half fill with broken ice, add a slice of lemon, and fill the glass with cold tea.” — Lincoln, Mrs D.A. Boston Cook Book. Boston: Roberts Brothers. 1884. Page 112.

During the Second World War in America, sugar was on ration from 1942 onwards, and Sugar Cubes disappeared from stores altogether. When Sugar Cubes finally became available again in 1945, it was newsworthy: “Sugar tablets and cubes will be available and in volume soon for civilian tables. Enormous quantities of tablets have been going to the Russian foot soldiers through lend-lease and to the American GI’s. Purchases have been cut almost in half with the war’s ending and sugar cubes are returning; first allotments are scheduled for hotels and restaurants.” — Paddleford, Clementine (1898 – 1967). Food Flashes Column. Gourmet Magazine. October 1945.

A Sugar Cube is often referred to as a “lump” of sugar.

This web site generates income from affiliated links and ads at no cost to you to fund continued research · Information on this site is Copyright © 2021· Feel free to cite correctly, but copying whole pages for your website is content theft and will be DCMA'd.
Tagged With: White Sugar