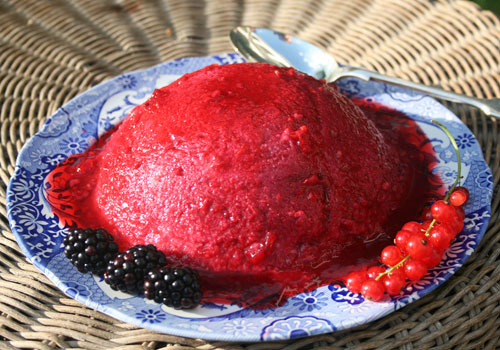 It is made from mixed fresh soft fruits, sugar and white bread slices.

Despite the presence of bread, summer pudding is actually extremely light, and very flavourful, and looks stunning and luscious. Even people who don’t like sweets or desserts often rave about it.

In choosing the fruit, you want fruits with lots of juice because essentially, summer pudding is really a bread and fresh fruit juice pudding. Typical fruits used in Britain include blackberries, black currants, raspberries, red currants. A standard historic fruit ratio was 4 parts raspberries to 1 part red currant. Some purists stick to this ratio, and won’t admit black currants or blackberries. Many people, though, like to always include a small portion of some tart fruit such as black currants to counter the sweetness of the other fruit. The reason is that many varieties of red currants sold these days have gotten sweeter than previous varieties, and lost their sharpness. Black currants add some colour contrast, too.

The berries you use can be in whatever proportion to each other you prefer, but there should be a mixture. Pit any stone fruit such as cherries first.

Taste the fruit first before you add sugar — if you find that you are using a particularly sweet variety of, say, raspberries, feel free to cut back on the sugar. Some people swear by adding some lemon zest.

Some people say they dislike the texture of the bread in summer puddings; they have almost certainly been served it made with plastic sandwich bread. You want firm, good quality white sandwich bread, ideally that you cut yourself. Really dense bread won’t work, because it won’t soak up the juice. Brown bread doesn’t work at all, and cheaper pre-sliced bread can turn slimy. Some people like to use brioche as the bread. The bread should be cut into slices just a bit less than 1 cm (½ inch) thick; the crusts should be trimmed off.

This bread is used to line completely the inside of a bowl (some recipes have you lightly butter the bowl first.)

You then simmer the fruit and sugar very briefly so that the fruit starts giving off juice. You then pour the fruit and juice into the lined bowl, then top completely with bread, and place a plate on top, and a weight on top of that, and set overnight in fridge. The weight should be about 900 to 1300 g (2 to 3 pounds.) Put a plate under the bowl in the fridge to catch any juices that drip out.

To serve, run a knife along the insides, and turn out onto a plate. If you have used a bread with a good crumb to it, you should be able to turn the pudding out to reveal a perfect dome shape.

Crème Fraîche might not always be the right substitute for cream, as the pudding can be already tangy depending on the fruit used. Custard sauce may be a better substitute. Or, instead of serving with cream, you can lighten the dessert up calorie wise by serving it with a non-fat Greek yoghurt.

Summer puddings freeze very well. But don’t freeze them in a bowl or pudding basin, or the expansion may shatter your crockery. Turn it out of the mould and package up with cling film, tin foil, etc.

“Remember, most of these were winter puddings. Nevertheless we did manage to invent a summer pudding, just to fill in between seasons as it were. Although most cooks call it summer pudding, some refer to it as hydropathic pudding because it was served to patients in nursing homes and spas where, it seems, pastry was not permitted. I prefer to believe that it was a simple invention of the British cook who just happened to have a garden full of fresh summer fruit, a loaf of bread and a pudding basin. The bread, cut into slices, lined the sides of the bowl. Raspberries, red currents or blackberries, gently combined with fine sugar, filled the bowl to the brim. More slices of bread covered the top, and the whole pudding was pressed down with a weight and left to get cold. Later the pudding was turned out onto a dish. By this time, the bread had soaked up the fruit juice and the pudding had set into a homogeneous mass of rich sweet fruit, over which the cook poured cream.” [1]Bailey, Adrian. The Cooking of the British Isles. New York: Time Life Books. 1969. Page 154.

Summer puddings originated at health spas and resorts in the 1800s, where it was referred to as “hydropathic pudding.” It was considered healthier than desserts with butter-laden pastry.

In the early 1900s, it acquired the name of ‘summer pudding’.

Alan Davidson says the first print reference to the name of summer pudding was by a Miss E.S. Poynter, a missionary to India, in 1904. [Oxford Companion to Food, Alan Davidson. Oxford: Oxford University Press. 1999. Page 770.]

Before that, there was a boiled pudding referred to as a summer pudding, but it held no resemblance. [Cassell’s Dictionary of Cookery with Numerous Illustrations, Galpin:London: Cassell, Petter. 1875. Page 944.

This web site generates income from affiliated links and ads at no cost to you to fund continued research · Information on this site is Copyright © 2022· Feel free to cite correctly, but copying whole pages for your website is content theft and will be DCMA'd.
Tagged With: Bread Puddings, English Food