×
You are here: Home / Archives for French Mustard

Beaujolais Mustard is made the same as Bordeaux mustard is, except red wine and ground red mustard seeds are used giving it its claret colour. Cooking Tips Its mild taste is very nice for cooking as it can add the zip of mustard without overwhelming your dish.

Bordeaux Mustard is made from brown or black unhusked mustard seeds ground into a fine flour, mixed with sugar, tarragon, and white verjuice. It has a sweet taste (sweeter than Dijon) with just a tang of sourness to it. The heat is relatively mild. The mustard is a pale yellow colour (though darker than Dijon.)…

END_OF_DOCUMENT_TOKEN_TO_BE_REPLACED 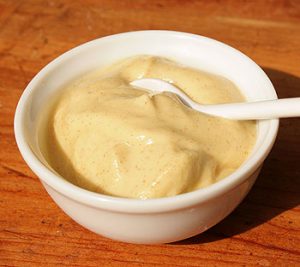 Dijon Mustard © Denzil Green Dijon Mustard is a style of mustard originally made in Burgundy, France. It is named after the city of Dijon, which is the capital of Burgundy. 90% of all mustard made each year in France is Dijon or Dijon-style. 70% of that actually is made in the Dijon area. [Ed:…

END_OF_DOCUMENT_TOKEN_TO_BE_REPLACED 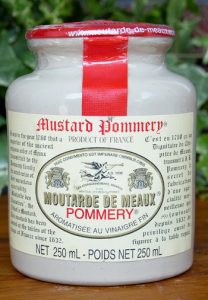 Meaux Mustard © Denzil Green Meaux Mustard tastes very similar to Dijon, but has a grainy texture because it’s made with cracked seeds. To make the mustard, black mustard seeds are roughly crushed, then mixed with vinegar and spices. History Notes Meaux is a cathedral town. The Monks there were amongst the first to make…