×
You are here: Home / Archives for Pork Sirloin

Pork Sirloin Chops are cut from the end of the loin area of the pig, near the back leg. In effect, they are cut from pork sirloin roasts, which may contain a small amount of tenderloin. The chops tend both to be lean, and to have a bit more bone that other bone-in chops will….

END_OF_DOCUMENT_TOKEN_TO_BE_REPLACED 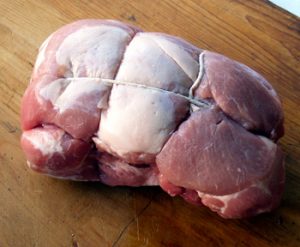 Pork Sirloin Roast is definition no. 410 A in the Institutional Meat Purchase Specifications standards in effect in North America. It is the back portion of pork loin that is left when the centre loin is removed by a straight cut down in front of the hipbone. A small portion of tenderloin may be included…

END_OF_DOCUMENT_TOKEN_TO_BE_REPLACED

‘Who cares about nutrients? What we want is taste.’ — Julia Child (to Jacques Pepin during ‘Cooking in Concert’)