×
You are here: Home / Archives for Wiltshire Food

Bradenham Ham originated in Wiltshire, England. The ham is first dry-cured in salt, then placed in a liquid cure of molasses, coriander, juniper berries, and other ingredients. After curing, it is aged for 6 months, then smoked. The outside skin of the ham becomes black and shiny. The meat inside is sweet and mild. Several…

END_OF_DOCUMENT_TOKEN_TO_BE_REPLACED

Bustards are very large birds. They have longer bodies than turkeys, weigh up to 30 pounds (13 1/2 kilos) and have a wing span up to 7 feet (2 metres.) Despite the impressive wing span, they are not great flyers and can only fly for short periods. To compensate, they evolved into good runners and…

END_OF_DOCUMENT_TOKEN_TO_BE_REPLACED

Devizes Pie was a pie made in Wiltshire, England. It has has long since fallen out of fashion. The pie’s filling is made from: cold trimmed calves’ head slices calve’s brain pickled tongue sweetbreads meat from the calf meat from a lamb slices of bacon hard-boiled eggs This mixture is put in an oven-proof dish,…

END_OF_DOCUMENT_TOKEN_TO_BE_REPLACED 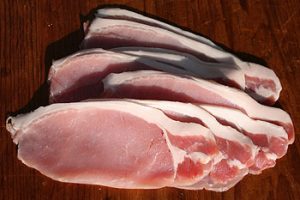 Wiltshire Bacon © Denzil Green Wiltshire Bacon is a wet-cured bacon made from pork loin. This bacon cut has a large round oval of lean meat from the loin, making up most of the piece of bacon. At the end of the piece, there is a small, narrow streaky portion from the pork belly; and…