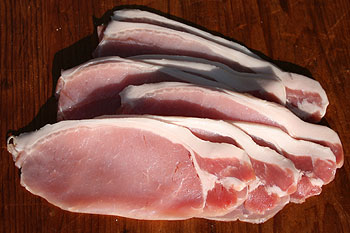 Wiltshire Bacon is a wet-cured bacon made from pork loin.

This bacon cut has a large round oval of lean meat from the loin, making up most of the piece of bacon. At the end of the piece, there is a small, narrow streaky portion from the pork belly; and along the top of the entire length of the cut is a strip of white fat.

The meat is cured in brine for anywhere from 1 to 1 ½ weeks, then aged for up to two weeks under refrigeration. After that, it may be smoked or sold as is. The method, referred to as the “Wiltshire Cure”, results in a lower-salt and sweeter bacon.

Wiltshire Bacon is now made more out of Wiltshire than in it.

Wiltshire Bacon should be cooked slowly. Put it in a cold (e.g. room temperature) frying pan, place the frying pan on the stove, and turn the burner heat on medium. Cook for about 15 minutes, turning occasionally. It will turn a golden colour.

Wiltshire Bacon does not respond well to microwaving; it is best cooked slowly.

The County of Wiltshire is in the south of England, to the west of London. Both Salisbury Cathedral and Stonehenge are in Wiltshire.

In the 1700s, a great deal of live pigs were routinely imported from Ireland, landing in Bristol. They would be walked to London (remember, no trucks in those days), and while passing through the county of Wiltshire, the town of Calne become by happenstance a natural stopping point. Over time, people in Calne decided to start cashing in on all this pork-processing business that was walking by their front doors. In 1770, Sarah Harris in Calne started the Harris bacon and ham empire by buying the odd pig or two, and making it into pork products. The business passed down through the family, and grew as it did, transforming itself into C. & T. Harris (Calne) Ltd.

A great deal of salt used to be used in curing the bacon, as the meat had to cure without benefit of refrigeration, during which time it could spoil before it reached preservation point. In 1847, George Harris (of the same family and company) made the trip to America to see how they were processing meat. He saw that they did the curing using ice houses. He came home with new ideas from the New World. By 1856, he had built a new curing plant with storage buildings whose roofs were packed with ice imported from Norway. The cool storage meant that a lighter brine cure could be used instead of heavy salting, making for a sweeter cut of bacon. In 1887, they switched to mechanical refrigeration. The business continued until 1981.

Some people assert that towards the end, the quality of the Harris bacon dropped. [1]

Chippenham in Wiltshire, about 6 miles away, also became a large bacon producing centre. Many other small towns in the area also had bacon curers.

Though even the name of Wiltshire’s largest city, Swindon, comes from its pork history — “Swine Down” — bacon is no longer one of the county’s main products. Now, alas, it is the home of carpets and rubber.

Cecil Beaton lived in Wiltshire, as did Madonna around 2004.

The name of Wiltshire started with West Saxon settlers who called the area “Wilsaetan” (‘saetan’ meaning settlers in Anglo-Saxon), and created a village called “Wiltun” (‘tun’ meaning town). By 878, the name was recorded as Wiltunschir.

[1] “As Roger Keen, the man behind Sandridge Farmhouse Bacon, just outside Calne, remembers, ‘every town in Wiltshire used to have their own bacon and ham curer. Harris used to have a good reputation but as they went on, the quality dropped. I wanted to keep proper Wiltshire bacon and ham going.’ “. Cited in: Parker Bowles, Tom. If those ‘slimy flaps’ of reformed meat are the ham nadir, then I’ve found the zenith. London: Daily Mail. 10 July 2010.

This web site generates income from affiliated links and ads at no cost to you to fund continued research · Information on this site is Copyright © 2022· Feel free to cite correctly, but copying whole pages for your website is content theft and will be DCMA'd.
Tagged With: British Food, Cures, English Food, Wiltshire Bacon, Wiltshire Food