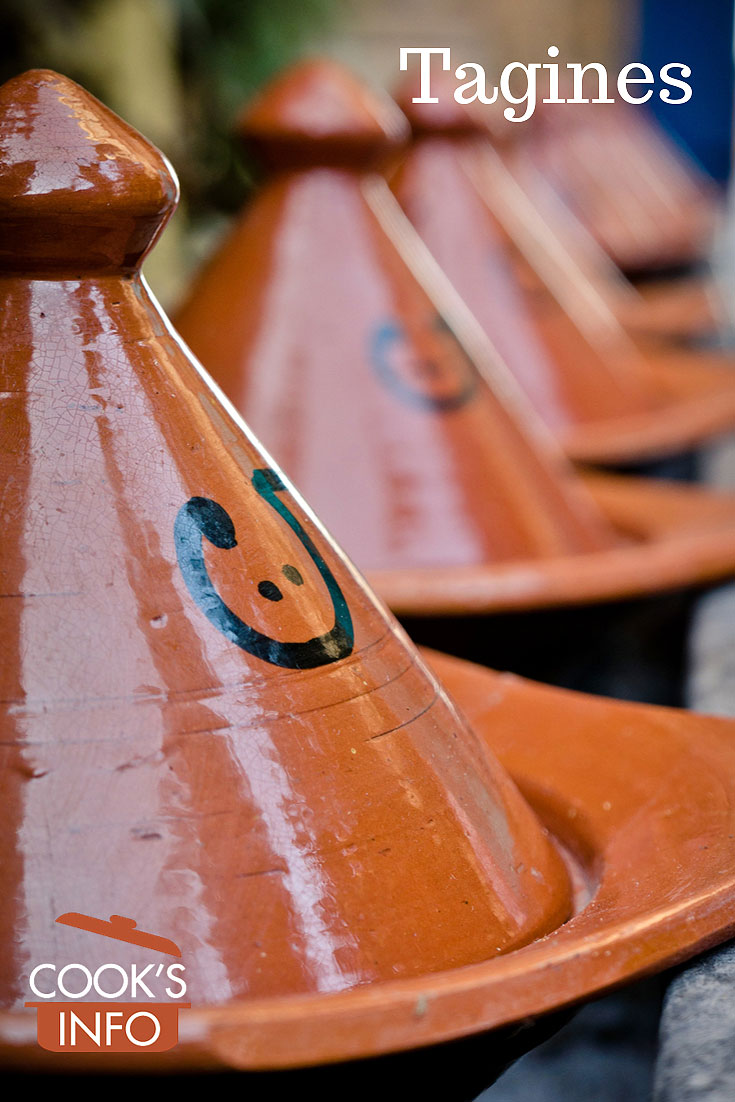 The word “tagine” (alternative spelling “tajine) refers both to a cooking vessel, and the dish of food made in it, usually a stew — similar to the dual usage of the world “casserole” in English.

This article is about tagine, the cooking vessel.

A tagine is essentially a two-piece conical or pyramid-shaped portable oven meant to be used over coals to make slow-cooked meals at low temperatures. It has a shallow, round, low-edged bowl which forms the base where the food actually goes, and a funnel, dome or cone-shaped lid with a hole at the top for steam to escape through. There is usually some kind of knob at the top of the lid to make it easy to lift off. The lid rests on the base, inside the edges.

The purpose of the shape of the cover is to encourage watery vapour to rise and exit via the top hole. But as it does, some of it also condenses on the inside of the cover. This condensation drips back down into the base, returning concentrated flavours back into the food at the bottom.

To serve the food inside, you just remove the cover, and take the base to the table. 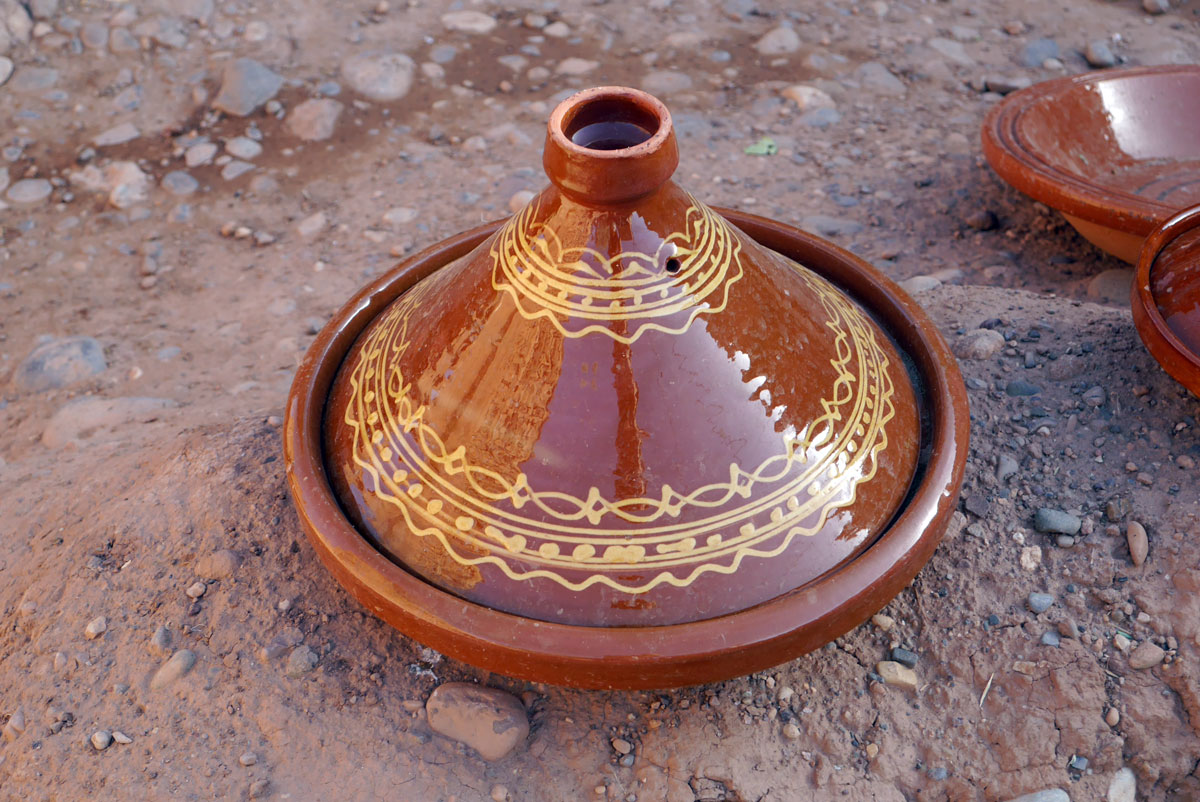 The tagine cooking vessels are usually earthenware, often glazed or painted. Ideally, one wants to check to see if there is any reliable information whether the glaze used is certified lead-free, but it may not always be possible to check, given the “folk art” nature of many tagines. You can also get highly decorated ones, which are used only for serving.

Modern models for Western consumers may be made of enameled cast iron, so that they can be used on stovetops. 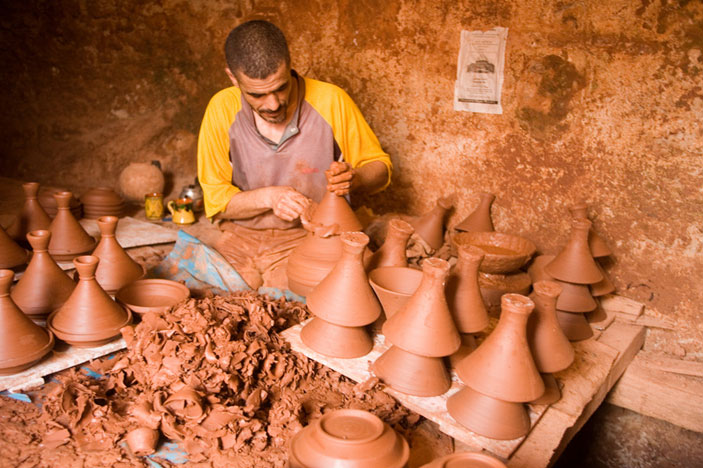 Season a new earthenware tagine with a mixture of half milk, half water (dispose of the milk and water afterward.) To use earthenware tagines on a Western stovetop, put a trivet on the burner first, and keep the heat very low. The earthenware ones are rarely dishwasher safe.

Don’t put a hot tagine base directly on a table; put a hot pad under it first.

Dishes made in a tagine

The stews prepared in a tagine have thick, spicy sauces. They often combine savoury with sweets such as honey, or dried or preserved fruits (such as preserved lemons.) Recipes will draw on spices that in Western kitchens are now mostly reserved for desserts. A frequent spice mixture used is Tunisian Five Spices.

The exception to the stew description are tagines made Tunisian-style, which are more like frittatas. Meat is cooked into a stew thickened with something like beans, bread crumbs or potatoes. Cheese and eggs are added, and the dish is allowed to cook further until the eggs are set and the edges are crisp. 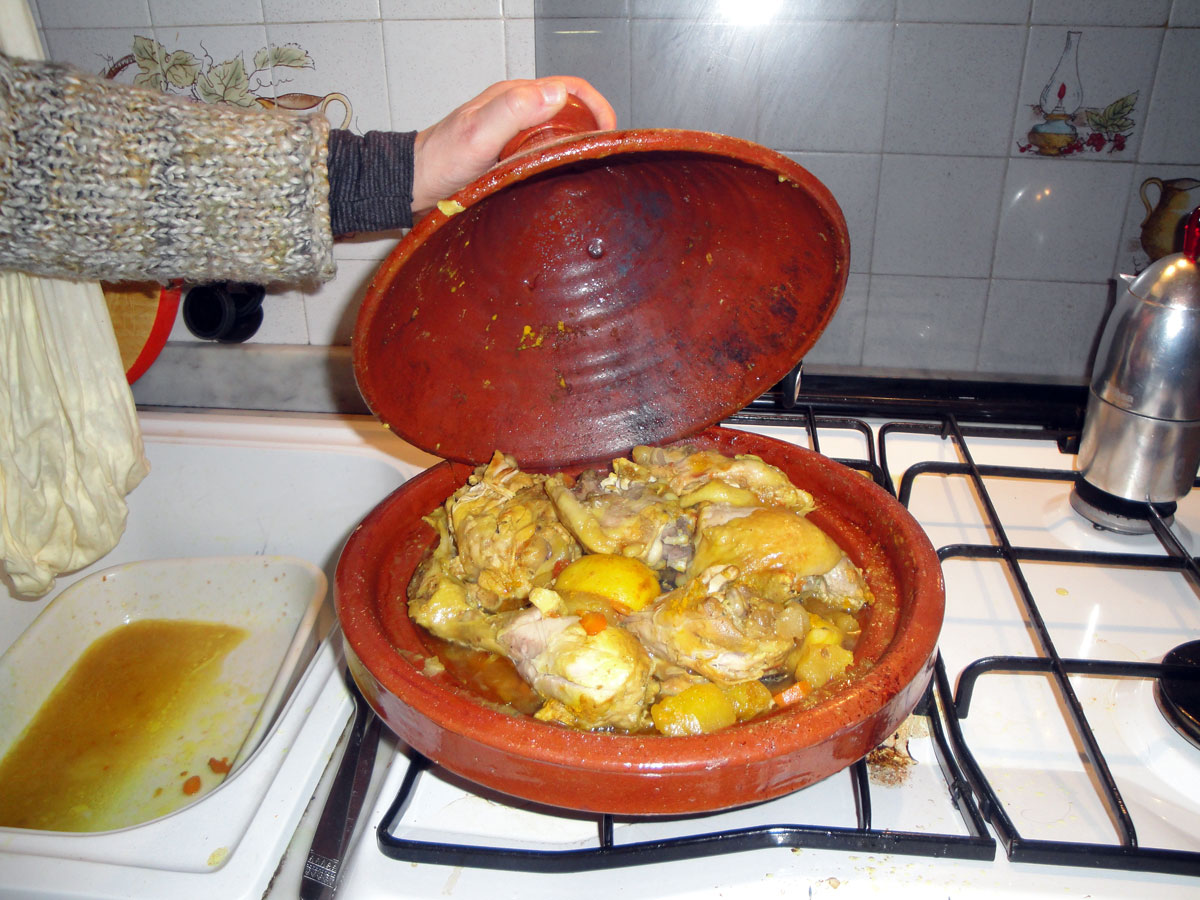 You simmer food in a tagine on the stovetop or in the oven. Both earthenware and enameled cast iron ones can be used in ovens.

The food in it doesn’t need stirring.

Essentially, the cooking method is braising, so less-expensive cuts of meat are usually called for.

Frequent side dishes are couscous, flatbreads or rice.

Tagines originated with Berber tribes and are now used in North African countries such as Algeria, Morocco, and Tunisia.

This web site generates income from affiliated links and ads at no cost to you to fund continued research · Information on this site is Copyright © 2022· Feel free to cite correctly, but copying whole pages for your website is content theft and will be DCMA'd.
Tagged With: Arabic Food