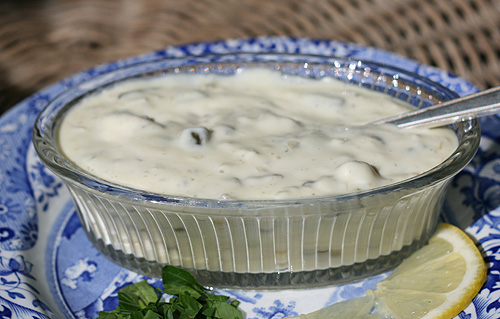 Tartar Sauce is a thick, whitish fresh sauce that has mustard, tarragon and finely chopped vegetables in it such as onions, capers, and pickles. These days, it is mostly used as a condiment accompanying fish or seafood.

It is served room temperature or chilled.

You can buy jars of Tartar Sauce concentrate, which you then mix 1 to 3 with the mayonnaise (or crème fraîche or fromage-frais) of your choice.

To whip up a facsimile quickly: 125 ml (½ cup) mayonnaise, with a few squeezes of fresh lemon juice and a few teaspoons of sweet green pickle relish or finely chopped gherkins.

You can mix up your own batch of Tartar Sauce using mayonnaise, relish and some mustard. Simple recipes for it are all over the place.

Hellman’s introduced its commercial Tartar Sauce in jars in the 1920s. This was a natural move for Hellman’s, as Tartar Sauce is based on mayonnaise, though more sophisticated versions now use crème fraîche or fromage-frais instead of the mayonnaise.

It’s not certain when Tartar Sauce originated. It’s a modern recipe, for sure. The French meat dish “Beef Tartare” was served with a piquant, thick whitish sauce that was called Tartar Sauce, and in the absence of better guesses, that seems to be what we have to go with. The idea of such a sauce isn’t all that new though: versions of it exist in Medieval recipes, and those recipes themselves were inherited from the Romans. The French version, though, is based on mayonnaise, and that would put its earliest origins no earlier than the invention of mayonnaise, which probably happened in the mid 1700s.

The Tartar peoples of Mongolia were considered quite “rough”. Beef Tartare is roughly-chopped beef, and Sauce Tartare is a sauce that is not quite smooth as it has bits of stuff in it, so one supposes a bit of a “rough sauce”. Tartar Sauce has nothing to do with Cream of Tartar, nor is an a traditional recipe whipped up by the infamous horsemen from Mongolia.

Sauce Tartare in French is usually translated as Tartar Sauce, though some people like to be fancier and retain the French “e” at the end of Tartar — i.e. Tartare Sauce.

This web site generates income from affiliated links and ads at no cost to you to fund continued research · Information on this site is Copyright © 2022· Feel free to cite correctly, but copying whole pages for your website is content theft and will be DCMA'd.
Tagged With: French Sauces, Roman Food