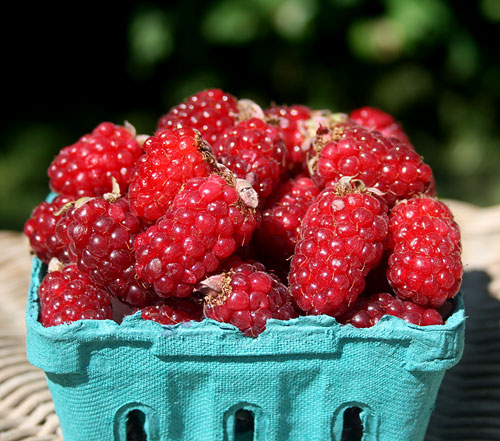 Tayberries are berries that look like deeper red, tall, cone-shaped raspberries. Their fragrant smell and tart-sweet taste is reminiscent of blackberries and raspberry mixed together.

Some cultivars have a nice balance of sweetness and refreshing tartness for out of hand snacking or for enjoying as a bowl of fruit. Other cultivars are considered by many people too tart to eat fresh on their own.

They are very soft, making them difficult to pick and ship without getting squished, so they are seldom sold fresh in most grocery stores — you are more likely to spot them at a farmers’ market.

A Tayberry bush grows 1.8 to 2.1 metres (6 to 7 feet) tall; the canes need trellises or support. There are lots of thorns, though thornless cultivars such as “Buckingham” are now available. The bush is cold hardy down to -26 C (-15 F.)

The berries, produced only on year-old canes, are reddish purple, and the size of blackberries, but cone-shaped, up to 3 ½ cm (1 ½ inches) long. They ripen earlier than blackberries.

Each bush will yield about 6.3 kg (14 pounds) of Tayberries.

Wash and pinch the top leaves off between your fingers.

Will keep 3 to 5 days in the refrigerator, depending on how fresh they were when you got them. If they came in a small basket, store in that basket with a plastic bag around it. Don’t wash until ready to use or they will go mouldy.

The Tayberry is a cross between a black raspberry developed at the Institute known as “626/67” and an Aurora blackberry, developed in Oregon (*not* a Loganberry, as reported in many places.)

The berry was released commercially in 1979.

The Tayberry is named after the Tay river in Scotland.