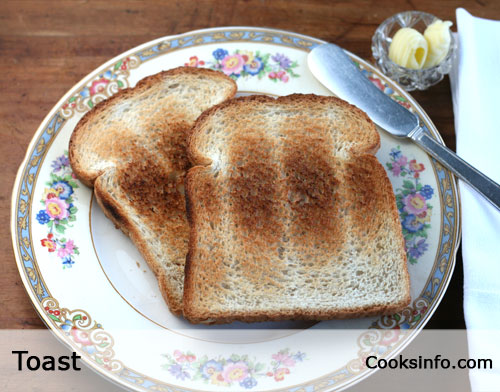 To toast something is to lightly grill or heat it so that the surfaces brown. In English, as a noun, it always refers to a slice of bread that has been toasted.

Toast is a food item that many people will express strong preferences about regarding colouring, texture, thickness, temperature and toppings.

Preferences range from barely warmed slices of bread to burnt offerings. Great household battles range over what setting to leave the toaster on: invariably, someone forgets to check the setting and then it all starts up again. For what it’s worth, in the debate over what colour toast should be, the Oxford English Dictionary defines “Toast colour” as “a light brown.”

The entire continent of North America is mystified by a simple British breakfast table tool: the toast rack.

North Americans look at a toast rack and see an instrument specifically designed to torture toast and deliver it ice cold before being buttered at the table. For them, instead, toast has to be buttered the second it leaves the toaster — a 20 second delay and all is lost. To Brits, a toast rack is an instrument designed to keep pieces of toast separate from each other, so that the pieces of toast will stay hard and crunchy, and not get moist as they would when stacked on top of each other. Which is to say, the way North Americans like toast.

While any bread can be toasted, there is a general sense that there is a kind of “generic” toast bread out there. It’s the thinly pre-sliced, generic supermarket white bread with a soft, non-chewy “crumb.” It’s what most people in North America and Britain buy as regular bread, and sometimes refer to as “toast bread.” In Germany, it is called “Toast-Brot.” It has a nice square shape that fits perfectly in all toasters, and has the right thickness so that it won’t get stuck in pop-up toasters. There are different degrees of thickness, though: some people prefer it sliced more thickly, as in “Texas Toast”, others prefer it more thin. One popular brand of toast bread in the UK is called “Warburtons Toastie” and “Warburtons Super Toastie”; you can also get it at some stores in America.

You can actually toast any kind of bread, of course, though French and Italian chewier crumb breads tend to toast up quite brittle. Thicker slices are better toasted under the grill or in a toaster oven. The problem with toaster ovens, though, is that the bread being toasted in them really does seem to need 1 ½ rounds in them to make a golden-brown piece of toast.

This is bread that tastes something like what North Americans call an English Muffin, and what Brits just call a muffin. You can buy it in stores or make it yourself. Recipes for making it yourself don’t require kneading.

Stale bread gets a second life when toasted.

In the Middle Ages, toasted bread was used as a thickener for sauces.

“When the girl returned, some hours later, she carried a tray, with a cup of fragrant tea steaming on it; and a plate piled up with very hot buttered toast, cut thick, very brown on both sides, with the butter running through the holes in it in great golden drops, like honey from the honeycomb. The smell of that buttered toast simply talked to Toad, and with no uncertain voice; talked of warm kitchens, of breakfasts on bright frosty mornings, of cosy parlour firesides on winter evenings, when one’s ramble was over and slippered feet were propped on the fender, of the purring of contented cats, and the twitter of sleepy canaries.” — Kenneth Grahame (1859-1932). The Wind in the Willows (published 1908).

In July 2011, results of a study on the “perfect piece of toast” were released in Britain. (Newspapers billed the study as having been done by a team of scientists, though it was actually done by a consultant food researcher named Dom Lane, working for the Bray Leino public relations company in a study commissioned by Vogel’s, the bread making company.)

Mr Lane defined a “good’ piece of toast as being golden-brown in colour, and maintaining an internal softness while having an external crunch. The outside would be 12 times crunchier than the inside.

Mr Lane toasted 2,000 slices of bread over a one week period for the study.

He found the best thickness of bread was 14 mm, and ideally would have come from the fridge and be at a temperature of 3 C. The bread should then be toasted in a 900-watt toaster, with the dial on it set to 5 out of 6, and cooked for 216 seconds, achieving an internal temperature of 154 C.

He recommended that the toast be buttered using .44 grams of butter per square inch of toast. He also recommended that ideally, the toast should be cut diagonally for optimal fit into mouth, and be served on a plate that has been warmed to 45 C (the warmed plate minimizes condensation underneath the toast on the plate.)

A previous study was done in 2003 by a Professor Bronek Wedzicha at the University of Leeds, funded by Lurpak butter. That study, done over three months, recommended that the bread be toasted to 120 C, that the butter be at 5 C and be applied within 2 minutes of the toast being done, and found that people expected buttered toast to have patches of only partially-melted butter on it. He said the thickness of the butter applied should be 1/17th the thickness of the bread.